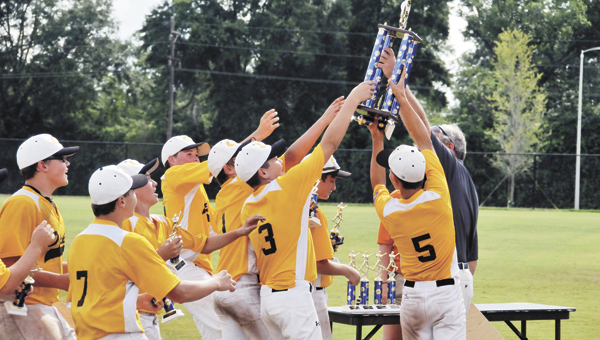 Opp scored eight runs in the top of the fourth inning and the Bobcats rolled to a 10-2 victory over Demopolis to claim the 11-to-12-year-old Cal Ripken State Championship on Monday at Johnson Park.

The Bobcats and Demopolis were tied 2-2 going into the fourth inning. Once Opp scored its first run to break the tie, the runs started pouring in.

With this victory, the Bobcats won their first state championship in this age group. They, along with Demopolis, qualify to play in the southeast regional tournament July 25-29 in Holly Springs, N.C.

To get to the championship game, Demopolis needed seven innings to top Butler, 6-3. The Bobcats beat Covington County 3-0.

Opp’s Tylur Schively hit an RBI double off the fence in the top of the third inning to tie the game at 1-all. Spurlin Kelley later helped the Bobcats take their first lead with an RBI single.

Demopolis got out of the third inning on a double play to give the team in blue some needed momentum.

In the bottom half of the third, Demopolis’ Payton Greary got an RBI single to tie the game up a second time at 2-2.

Later in the third, Demopolis’ Collin McCrory loaded the bases with a single, but the Bobcats’ defense got out of the two-out jam with ease.

Opp’s Trey Moody got the scoring going in the top of the fourth with an RBI double to break the tie for the last time. Right afterward, Logan Ross nailed a two-run double and before you know it, the Bobcats led 9-2 with no outs.

Demopolis’ Grant Patterson, who finished 2-for-3, hit in his team’s first run with a double in the bottom of the first inning.

Schively went 2-for-3 with two doubles; Kody Richburg went 3-for-4 with three singles; Ross went 2-for-3; Dalton Grider went 1-for-3; Kelley went 1-for-4 and Lane Worley had a triple to lead the Bobcats in the championship.

Demopolis’ Henry Overmeyer went 1-for-4; Greary went 2-for-3; McCrory and Andrew Fuqua went 1-for-2 each.

In its 6-3 extra-inning win over Butler, Demopolis broke the 3-3 tie at the end of regulation with three runs in the top of the seventh inning.

McCrory had a single; Hunter Thrash had two singles; Parker Hallmark had an inside-the-park home run; and Fuqua had a single to lead Demopolis, who had five players out with the stomach flu.

Demopolis took a 3-2 lead on an RBI single from Thrash in the top of the sixth inning, but Butler added the tying run in the bottom of the sixth to force extras. Butler had runners in scoring position later in the sixth, but Demopolis held its own.

Demopolis’ three runs in the seventh were as a result of an error.

Ross, Schively and Ethan Baker were responsible for Opp’s two runs in the second inning to get things started on the right track.

Ross scored on Baker’s double, and Baker later scored on a triple from Schively.

Later in the game, Schively scored on an RBI single from Worley.

Grider, Baker and Schively went 1-for-3 each to lead the Bobcats.

Covington County’s Trystian Barber and Hogan Nichols went 1-for-3 each; Justin Peeples went 1-for-2; and James Hawkins went 2-for-3.

CC scored two of its three runs with two outs after the Bulldogs had a 3-1 lead in the fifth.

Andalusia took an early 2-0 lead in the first inning when Thomas Phillips hit a two-run triple to score Sebaskin Stallworth and Jake Barefoot.

Covington County had to go into extra innings with Semmes in pool play, but held on for a 12-8 victory.

Opp defeated Andalusia 5-1 in its final game of pool play earlier on Sunday.

For complete tournament action, visit The Star-News’ website at www.andalusiastarnews.com.

Covington County wasn’t about to give up despite a 4-1 deficit to Opp on Sunday in the 10U Babe Ruth... read more