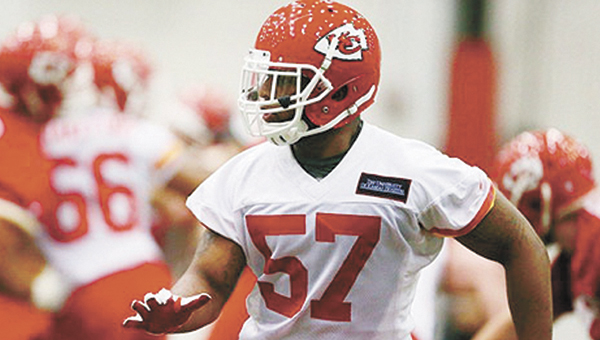 Johnson was selected by the Chiefs in the fourth round of the 2013 NFL Draft in April.

Johnson said he hasn’t met any of his fans, yet.

“Besides Twitter, I haven’t, not in person,” he said, “but I’m sure when I get here and get settled, I will. So far, the fans have welcomed me and the other rookies and free agents in with open arms and they just want us to go out and do our best and we’re willing to do that for them.”

On the character of the team, Johnson said it’s simply that “we won’t be denied.”

“We want to have a better year than what’s been going on in the past couple of years; we have a new coaching staff and some new players on the team and the veterans are stepping up into that role of leading,” he said.

When asked what his approach is as a rookie, Johnson said he’s been told to be patient and his time will come.

“I have a lot of veterans who have played a lot of football, before I got here and I have to respect that,” Johnson said. “The only way I can go out and earn that is to go out and bust my butt every day and eventually that leadership role will come.”