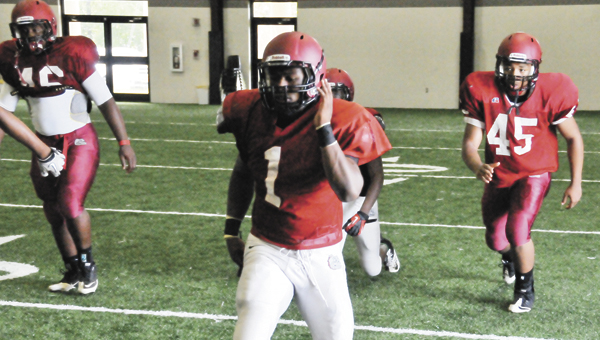 Bulldogs have been focusing on getting better, accountability

This summer, Andalusia has been hitting the weight room and has utilized its indoor facility for football work Monday through Thursday.

AHS head football coach Brian Seymore has been away on a mission trip to Haiti and on vacation in Canada. Locke spoke in his stead.

Locke said the workouts so far, have been good for the players.

“They’ve been working real hard,” he said. “They’ve been up there at 6 (a.m.) doing some weight training and doing some drill work — trying to get better football wise.”

Right now, it’s all about the process, the coach said.

“They’re buying into our system and the way we want to do things,” Locke said. “Our big thing this fall camp is accountability — being accountable for each other and for yourself.”

What Locke meant by fall camp basically encompasses everything involved with working out this summer.

The Bulldogs have been working every Monday, Tuesday, Wednesday and Thursday. They have had this week off and will continue work starting on Monday.

Andalusia, like every other team in the state, will have a dead week during July 15-19 for the All-Stars Sports Week. No sporting activities will take place during the five-day period.

On the days Andalusia is working out, the Bulldogs par take in weight lifting, agility drills, cardio and fundamentals, Locke said.

“We’re up here working and getting better,” he said.

Locke said he’s seen a big improvement from the players this summer, especially when it comes to facing adversity.

“The biggest thing for us is becoming more mentally tough — letting them face adversity,” he said. “How are they going to react during a ball game? That’s why we’ve been challenging them.”

Ways to challenge the players include running them through a “gauntlet” drill, which pushes them to fail and teaches the players how to overcome the failure.

Locke said the Bulldogs’ coaching staff is going to push the players to become more accountable to each other these last three weeks of summer work outs.

“We’re really challenging them to push themselves and their teammates,” he said. “It’s a process in which you do things. Whenever you’re not there, you’re not only hurting yourself, but you’re hurting the team as well. That’s what we’ve been preaching and teaching to them.”

Straughn’s seniors chose to work out during July 4th week

Straughn’s coaching staff met with their senior football players and gave them two options: have two weeks off from workouts... read more