Straughn’s seniors chose to work out during July 4th week 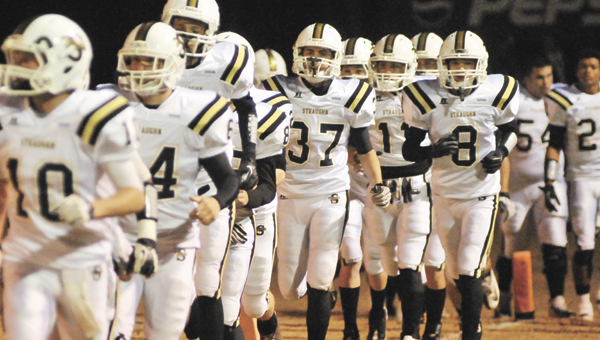 Straughn’s coaching staff met with their senior football players and gave them two options: have two weeks off from workouts in July, or work out during the week of the July 4 holiday.

The seniors chose to work and SHS head football coach Trent Taylor said the coaches weren’t about to disagree with them.

The Tigers just completed their fifth week of summer workouts.

Straughn’s main reason why it chose to workout this week was because of the All-Star Sports Week July 15-19. All sports activities have to cease during the week, forcing a dead week for programs.

“We met with the seniors and we just opted not to do that,” Taylor said about taking this week off. “In doing so, that would’ve meant we would’ve had basically two weeks off in July, which is a month prior to the season actually starting.

“They wanted to continue to work and I certainly didn’t disagree,” he said. “That’s what we chose to do.”

Straughn is lifting weights on Mondays and Wednesdays. Players have the choice of coming either at 6 a.m. or 5:30 p.m. each day. Tuesdays are reserved for football only, usually at night.

“Everything we’re doing on Tuesday is obviously related to a practice as much as you can legally have,” Taylor said.

When asked how the players’ progression is going, Taylor said the coaches can’t measure it, yet.

“We’ll measure that at the end,” he said. “The week before the last week will be testing week for us. We’ll max and that kind of thing. We have not obviously been as grueling with the running in the month of June. As we get into July, we’ll shift that up a little bit as we get closer to the season.

“Somewhere in there there’s a fine line between whether we’re certainly doing enough to get in shape and ready to play this fall,” he said. “At the same time, you don’t want, from a strength and obviously from a weight gain stand point, you don’t want to do anyting that’s detrimental to that, either.”

The number of kids who have made it 100 percent to workouts this summer is fairly big, Taylor said.

After this week, the Tigers will have three more full weeks of work outs before the start of fall practice on Mon., Aug. 5.

Andalusia’s varsity and junior varsity volleyball squads will be playing in Brewton at the playdate Aug. 1. |Andrew Garner/Star-News The... read more