Calling the game he loves 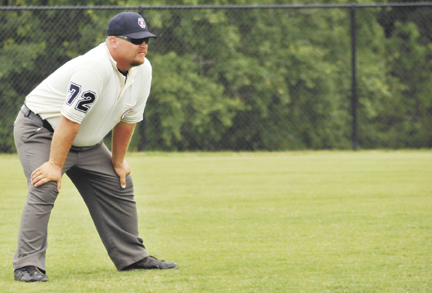 For the past nine years, Shane Cook has called baseball games as an umpire, either behind the plate or in the field. The farthest he went as a man in blue was to the 2013 Alabama High School Athletic Association’s State Semifinals, where he officiated in the series between Pelham and Auburn.

Shane Cook is a man of many hats.

One hat in particular, an umpire’s, he enjoys wearing more than anything.

Cook, a Red Level resident, has been a baseball umpire for the past nine years.

He was working at Shaw Industries at the time and got into the activity he now loves through Ken Helms, who was the president of the umpires for the Alabama High School Athletic Association.

“(Helms) was looking for umpires,” Cook said. “That’s how I heard about it and that’s how I got started.

Getting the chance to be around the sport of baseball, which he grew up playing in Andalusia, is all Cook said he needs to be able to put on the title of “blue” each and every game.

“To just be around the sport,” he said. “The money’s not bad, either. I don’t just do it for the money. I do it because I love it.”

Cook’s love for umpiring and ability to do the job well landed him being named the Umpire of the Year in the Southeast District, which covers Troy, Covington County and Dothan.

Additionally, Cook will be calling balls and strikes at the 2013 16-18 Babe Ruth Baseball World Series in August. He will be one of three local umpires who will be making the calls. Cook joins Helms and Opp head baseball coach Michael Cassady as those who were chosen locally to umpire at the World Series.

Earlier this year, Cook got the opportunity to umpire during the state semifinals.

“That’s the furthest I’ve made it in the playoffs so far,” he said, noting that calling the state championship is a goal. “I called the Pelham and Auburn series. That was a pretty good series.”

And getting to call games during the World Series is an honor as well, Cook said.

“It’s going to be pretty big event,” he said. “I’m looking forward to it.”

Coming up next weekend, Cook will be an umpire in the 13-to-15-year-old Babe Ruth State Baseball Tournament at LBWCC.

One of the many elements umpires have to get ready for is crowd reaction to calls.

Cook said if you were to make a bad call, it’s essential to block it out and move on to making sure you get the next call.

In order to create a “mental block” of the crowd, it “takes years,” he said.

“People are going to holler regardless,” he said. “You’re going to make half of them mad at you and half of them happy at you every time. You’ve just got to have the mental block in your head just to not let it get to you.”

In his nine years of being an umpire, Cook said he’s never thrown a coach out of a game.

When asked what it he likes about calling the game of baseball he grew up playing, Cook said it’s all about the relationships.

“I like having camaraderie with the coaches and the players and to be out there and be a part of the game,” he said. “That’s what I like doing.”

Cook had to make a sport adjustment this past weekend at the Babe Ruth State Softball Tournament. He called his first softball game on Thursday and continued to do so through Saturday.

Cook said it was a different experience.

“For the most part, it was alright,” he said. “I think I’ll still stick with baseball.”

While he may be busy during the spring and summer months, Cook said he’s not quitting any time soon.

Cook is married to wife, Tonya; and has two daughters, Paige and Lexie.