Do anything for a win 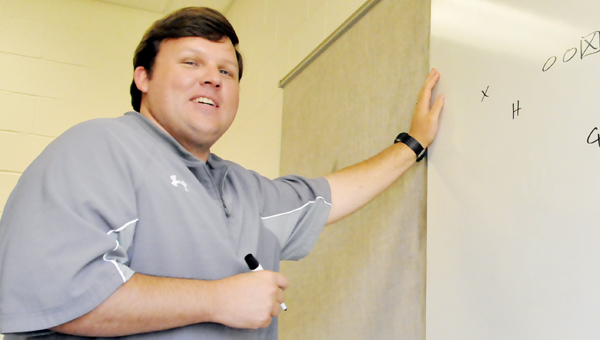 Whatever it takes to win.

That’s the mind set new Andalusia offensive coordinator Randy Bryant is bringing to the Bulldogs’ football program this season, and in the future.

Bryant was hired earlier this summer and has been hard at work, working with players in summer workouts and even drawing up plays.

Originally from Troy, Bryant worked as a student coach at Troy University. After an internship in Enterprise and being hired at CHHS, Bryant decided to work on getting his Master’s degree.

When he got his advanced degree, he was hired at Fort Payne High School, where Bryant served as the wide receivers coach for five years until being hired at AHS.

“I’m going to do whatever it takes to win on Friday night,” he said. “I’m not really a pass guy or a run guy — it’s whatever we got to do to win.”

AHS head football coach Brian Seymore’s energy, the new facilities, the school’s tradition and history are just a few things that attracted Bryant to this job.

“I have a mutual friend with (AHS assistant coach Matt) Johnson,” Bryant said. “That’s how I found out about this job, and then I came down here and interviewed.”

This will be Bryant’s first year as an offensive coordinator. He called plays for the ninth grade and junior varsity teams at Fort Payne.

When asked what he can bring to AHS as a coach, Bryant said he can offer a lot as far as being mindful of the small things.

“I want to say attention to detail,” he said. “Discipline. High expectations. Organization. It’s all about the details. That’s how you win.”

Paying attention to details using technology is also a must, Bryant said.

Bryant said he’s anxious to get the ball rolling this season, where fans can expect some noticeable changes.

“I ‘m really excited,” he said. “I’m just here to help these kids achieve some goals both on the field and off. If they’re an offensive player, I want them to be scuessful in our offense, but the team goal is win. That’s all that matters.”

Bryant is married to Natalie, and their first child is on the way.