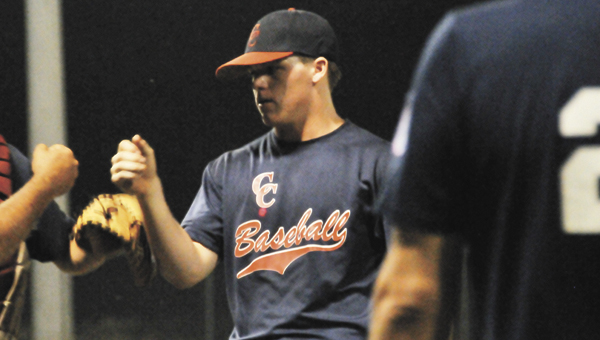 With the recent rains that swept through the area in the last week, the game was moved to the only dry field in the county. Covington County usually plays on Crum Foshee Field at LBWCC.

Covington County blew an early 2-0 lead in game one to fall 5-4, but came back in the night cap with a 7-1 victory for the split.

Covington County will next play in Brewton on Saturday at 2 p.m.

CC scored five runs in the bottom of the fourth inning to break the game wide open.

Chase Short and Ross Graham led the inning with back-to-back RBI singles to push their lead to 4-1.

Justin Scherzinger then added an RBI ground out to make it 5-1, and Peyton Maddox added an RBI single to make it 6-1. Later on the same play, Covington County squeezed in another run to bring its game-winning score up to seven runs.

Short laced an RBI triple in the bottom of the second inning to right center to bring the game to 2-1 after an early 1-1 tie.

Brewton led 4-3 in the top of the fifth inning with two outs on the board. It scored on a throwing error to make it 5-3 after a walk.

Covington County came back in the bottom of the fifth when Graham hit an RBI single with two outs to cut it to 5-4.

County got two men on with errors in the infield, but couldn’t get them across as the last batter — Cody Marler — flew out to third to end the game.

Brewton scored one run in the second inning, two runs in the third inning and one run each in the fourth and fifth in the win.

Howard gets off to good ‘start’ in Houston