Stingrays peaking at the right time? 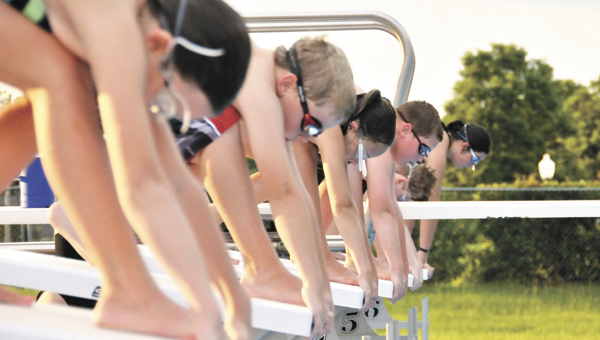 The Andalusia Stingrays, young and old, have been focused this week in anticipation for today’s district swim meet in Eufaula. | Andrew Garner/Star-News

Andalusia’s Stingrays are peaking at the right time and that’s a good thing as they will be competing at today’s Alabama Recreation and Parks Association’s district meet in Eufaula.

The Stingrays will be swimming against teams in their district — Troy, Eufaula and Dothan — to solidify spots to swim at the state meet later this month in Cullman.

Stingrays coach Gavin Donaldson said the team has been focused all week for today’s meet.

“Their focus is there on doing it right,” he said. “(Last Saturday), we worked a lot on turns to get those bugs worked out of them.

“Then, the extra thing will be at district, like any meet, is where you got adrenaline,” he said. “Typically, adrenaline can cut one to two seconds. You get one dump a race.”

Mike Gayford, who coaches the 11 and under group, said they’ve been practicing hard for today’s event.

“We spent the first part of the season working on stroke fundamentals, and now we’re working on speed,” Gayford said. “Once we put the stroke technique and speed together, we’re expecting some significant time drops. We’re expecting some to go on through district and state, and have a few people qualify in individual events.”

Due to the large number of swimmers at today’s meet, the amount of time it takes to run the meet will drop because of overhead starts. This is where kids stay in the water and the next swimmer will start the next event before the previous swimmer exits the water.

Donaldson said there will be around 130-140 kids swimming today.

Leading up to today’s meet, Donaldson said he’s talked to the swimmers about taking advantage of the golden “opportunities” that are given.

At this stage of the season, team points matter just as much as individual points.

“They’re understanding that it’s a time for a team sport,” Gayford said. “Every point, every position counts. That’s what we’re trying to make sure they understand. Some people have sitched events to help them get extra points. ”

“It’s going to be crucial if this group who wants to attain another district championship to lay it on the line for themsselves or the team,” he said. “That’s what I’ve been telling them.”