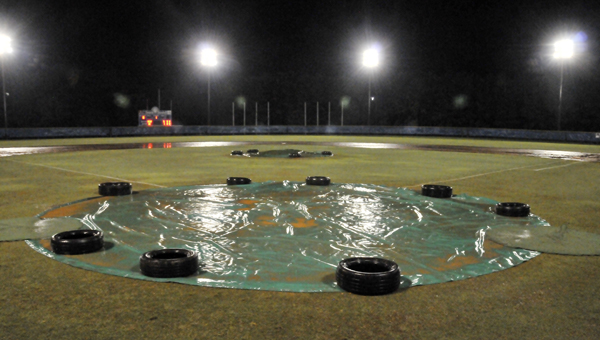 Covington County led Childersburg 5-1 in the top of the third inning when the fourth rain delay of the tournament stopped play tonight during the 15-year-old Alabama Babe Ruth State Baseball Tournament at Crum Foshee Field at LBWCC.

The host team fell behind 1-0 after the first inning, but tacked on three runs in the top of the second, thanks to an RBI double and single from Zack Folmar and Dillan Jordan, respectively.

Covington County’s Lane Sirmon walked to load the bases with one out, and the host team managed to squeeze one run across on an RBI walk to Gage Worley to make it 3-1.

County added two additional runs on an error in the top of the third inning when play was stopped at 9:23 p.m. because of rain. Tournament officials called the game at 9:40 p.m. Action will resume between Covington County and Childersburg tomorrow morning at 9.

The third rain delay came right at 5:27 earlier this evening. The game between Mims Green and Millbrook didn’t start back until 8:04 p.m.

County led 3-2 in the bottom of the fourth inning and tacked on a run in the top of the fifth to go ahead 4-2.

A botched double-play try, which got one runner out, could’ve given the host team some needed momentum, but Mims Green took advantage by scoring three runs in the bottom of the fifth.

Both teams were held scoreless the final two innings of play.

Daryl George and Barrett Bush went 1-for-4 each; and Lane Sirmon went 2-for-4 to lead Covington County.

Tallassee scored one run each in the first, second and third innings and added another in the fifth on a defensive victory over Brewton today at Andalusia High School.

Tallassee’s Brett Jones hit an RBI single in the bottom of the fifth inning to give his team the four-run edge.

Brewton tried to score a run in the top of the sixth, but the run didn’t count because the hitter — Tim McDonald — used an illegal bat. The protest committee from both teams, umpires, coaches and tournament officials visited behind home plate because of the illegal bat.

McDonald was called out after hit hit an RBI single to score Malcolm Hawthorne. Hawthorne had to go back to third base.

Hawthorne, McDonald and Lane Chavers went 1-for-3 each to lead Brewton. Colton Morris went 1-for-2.

Dylan Davidson went 1-for-2; Jones and Booh Roberts went 2-for-3 each to lead Tallassee.