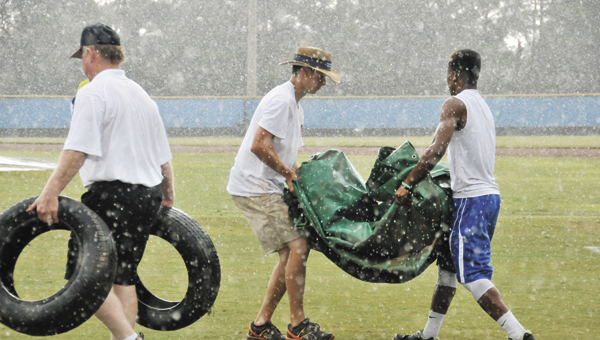 Despite four rain delays over the weekend, Covington County bounced back late Sunday and into Monday to win out in pool play action at the 15-year-old Alabama Babe Ruth State Baseball Tournament.

Covington County fell behind 3-1 after the first inning, but scored two runs in the sixth to break a 3-3 tie to beat Millbrook 5-3 in its final pool play game. Before the win over Millbrook, the host team defeated Childersburg 11-1 after picking up the game with a 5-1 lead in the top of the third inning. CC’s Childersburg game was called Sunday night because of rain. Action picked back up at 9 a.m. yesterday at Andalusia High School.

In action on Saturday, Opp suffered two losses in its pool play at LBWCC.

The Bobcats fell 10-0 to Tallassee in their morning game, and then fell 8-4 to Brewton in the night cap. Opp’s night cap loss came after a 5-and-a-half-hour rain delay. The Bobcats had to finish their game at AHS.

Millbrook bolted out to a 3-1 lead after the first inning, but county tied the game in the second and added two runs in the sixth for the win.

Behind strong pitching from Shane Jones, who came in during the fifth inning, county held on despite a late Millbrook threat in the bottom of the seventh.

Jones, Riley Eiland and Jerron Williams went 2-for-4 each; Gage Worley went 2-for-3; and Lane Sirmon went 1-for-3 with a double to lead Covington County.

Covington County wetn on to score six runs in the third inning and added one each in the fifth and sixth to get the 10-run rule win on Monday.

Covington County fell behind 1-0 after the first inning, but tacked on three runs in the top of the second Sunday night, thanks to an RBI double and single from Zack Folmar and Dillan Jordan, respectively.

Sirmon walked to load the bases with one out, and the host team managed to squeeze one run across on an RBI walk to Worley to make it 3-1.

County added two additional runs on an error in the top of the third inning when play was stopped at 9:23 p.m. because of rain.

Folmar went 2-for-4 with a double to lead Covington County. Barrett Bush almost completed the cycle, going 3-for-4 with a single, double and a triple.

County led 3-2 in the bottom of the fourth inning and tacked on a run in the top of the fifth to go ahead 4-2.

A botched double-play try, which got one runner out, could’ve given the host team some needed momentum, but Mims Green took advantage by scoring three runs in the bottom of the fifth.

Both teams were held scoreless the final two innings of play.

Daryl George and Barrett Bush went 1-for-4 each; and Lane Sirmon went 2-for-4 to lead Covington County.

Both teams were scoreless in the first two innings of play before the Bobcats scored three runs in the top of the third.

Opp’s Maverick Ladson reached on an error and later scored on another error to put the game at 1-0. Orlando Lacey hit a sac fly and Parker Bracke later scored on a passed ball to put Opp ahead 3-0.

Brewton scored its three runs in the bottom half of the inning after a walk, two errors and a sac fly.

Shortly afterward, rain started falling and play was stopped at 4:40 p.m. When the rain stopped, crews got the field in playing shape, but another system came threw and dumped buckets on the field to cause another delay.

At around 7:30 p.m., teams were advised to leave the field and come back in two hours to see if the field was playable. After that time had expired, tournament officials decided to finish the game at AHS because it would’ve taken another hour and a half to get the field playable again.

When action resumed at AHS, the Bobcats scored their last run in the top of the fifth inning when Brandon Williams came home on a throwing error to give his team its second lead of the game at 4-3.

Later in the inning, Opp had bases loaded with no outs, but couldn’t get any runs across because of a double play and a ground out.

In the bottom of the fifth, Brewton’s Austin Holmes hit a two-run single, Jake Najor scored on a passed ball and then added two addition runs — one on an infield single and the other on an error — to end the fifth with a comfortable lead.

Lane Chavers pitched three innings and struck out two to get the win for Brewton.

Lacey threw five innings and struck out six for the loss.

Williams went 2-for-3 to lead Opp.

Brewton’s Dakota Graves and Tim McDonald went 2-for-4 each. Najor went 2-for-3.

In Opp’s loss to Tallassee, the Bobcats allowed 10 walks and only managed one hit.

Williams led Opp and went 1-for-1.

Stingrays swimmer Chase Fillmer was one of 31 Stingrays who qualified for the state meet. | Andrew Garner/Star-News Andalusia’s Stingrays... read more