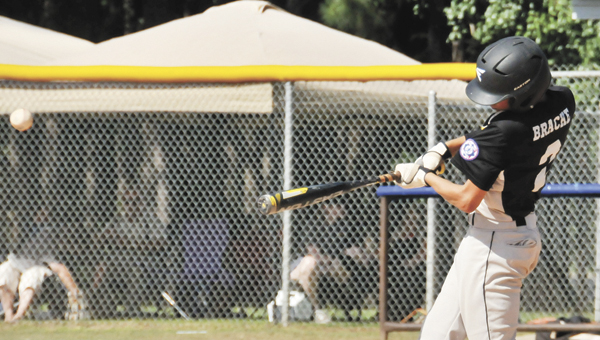 The game was going Opp’s way through the first four innings, but Mims Green put together five runs in the fifth and sixth and went on to beat the Bobcats 8-7 in the 15-year-old Alabama Babe Ruth State Baseball Tournament at Crum Foshee Field in Andalusia.

Opp took a good 6-3 lead after the fourth inning, where things were looking up for the only local team left in the tournament.

Opp advanced to the tournament quarterfinal round after defeating Elba 13-7 Monday night at Andalusia High School.

Mims Green pulled to one run in the fifth inning, thanks to a two-run single from Greg Yarbrough, which made a 6-5 ball game

Yarbrough’s single came after his team loaded the bases and with two outs on the board.

In the sixth inning, Henry Mann laid down a nice bunt single to start the threat for Mims Green. Then, J.T. Cosby hit a hard grounder ball to put two runners on with one out.

In a clutch hit, Jared Drayton line a two-run triple to left field to give the green team the go-ahead lead at 7-6. Mims greed would add one run later on in the inning, and hold out a late Opp threat in the top of the seventh to advance.

Mims Green will face familiar opponent Mims White at 1 p.m. today in the semifinals. Both teams play at the same park together in Mobile.

Opp’s Gregory House hit a two-run double to put the Bobcats in a 3-2 lead in the top of the third inning. Collin Holloway then added an RBI single to make it 4-2.

In the bottom half of the third, Drayton, who reached on a hit by pitch, stole third base and advanced home on an error to cut the game to 4-3.

The Bobcats tacked on two runs in the next inning to take their 6-3 lead.

Mims Green started to chip away at Opp’s lead in the bottom of the fifth with bases loaded and one out.

Parker Bracke went 2-for-4 to lead the Bobcas. Lucas Worley, House and Maverick Ladson went 1-for-4 each. Worley had a double.

Holloway went 1-for-3 with a double.