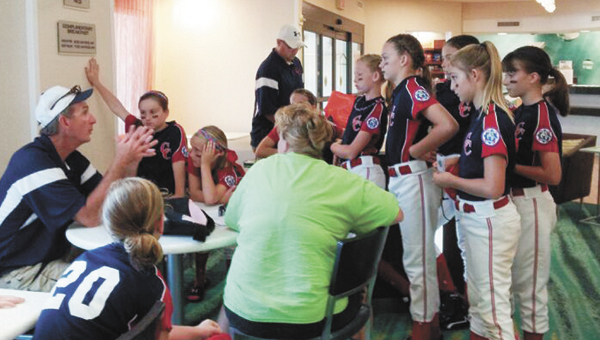 Covington County 10U All-Stars coach Ricky Arnett (left) talks to his girls before they hit the field Thursday. | Courtesy photo

At the end of the first inning, Glen Allen led 7-0 over the local softball team.

Covington County scored one run in the second inning on an RBI hit from Tori Hart that scored Ava Bailey.

The host team then went on to score four runs in the third inning to go ahead 12-1.

In the top of the fourth, CC’s Sydney Arnett scored her team’s second and final run of the game.

After the third out was called in the half inning, the game was called for the mercy rule.

“We played hard,” 10U All-Stars assistant coach Allen Catrett said. “We kind of dug ourselves in a hole to start with.

“Once we settled down, we played better,” he said. “Overall, the big picture for the girls is that they got some experience and got to see what else is out there. This is a good experience for them.”

Covington County will be back in action today at noon against Pitt County, N.C., and at 4 p.m. against Summit Point, W.V. to finish pool play.

Andalusia 12Us to play state tourney

Under the blazing, early-afternoon sun on Thursday, Andalusia toiled away during its practice at Johnson Park to get ready for... read more