Another chance to play ball 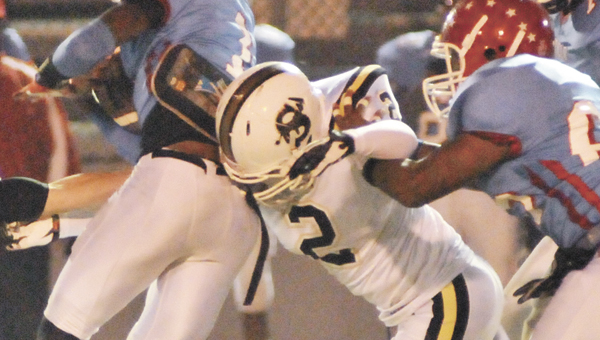 Dillan Conner’s phone rang Sunday and he couldn’t pass up what Straughn head coach Trent Taylor had to offer on the other end — another chance to play football.

Conner, who graduated from SHS in May, was an alternate for the South squad and a position on the team opened up at the last minute.

The linebacker packed his bags and drove up to Montgomery, where he participated in the Alabama High School Athletic Association’s All-Star Sports Week.

Fortunately, the South squad rallied from a 21-0 deficit to beat the North team 22-21 Thursday night at the Cramton Bowl.

In the game, Conner had one solo tackle and four assists.

“The whole week was great,” he said. “It was a bunch of fun. I made a lot of new friends. Most importantly, it was just football. It was another chance to play and talk football for another week.”

Conner said his favorite part was meeting new people who had the same mind set as him when it came to football.

During the game, Conner said the South’s defense was playing in more of a man-to-man formation when the North scored 21 points early.

“They were just moving down the field,” he said. “So, the coach decided to put in cover three for the rest of the game.

“We covered the zone well,” he said. “We just played with more aggression. We didn’t give up. Our offense really started clicking in the end.”

The South scored 15 points in the fourth quarter alone, and sealed the win when a defensive lineman caught an interception.

Conner said his most memorable moment came on what the North thought was a normal kick off.

“They let me fake the first kick off,” he said. “I had to fake the onside (kick). I had to act like the kicker and put the ball on the tee. I went one way, and the real kicker kicked it the opposite way to fake it.”

Even though the play didn’t come out as planned, Conner said it was a thrill.

The whole week “was just a lot of fun and a great opportunity to meet new friends and play another game of football.”

Conner doesn’t know where he’s going this fall for college. He said he needs to make a point higher on his ACT to be able to play football at Faulkner University. If that doesn’t work out, he’ll go to trade school at McArthur in Opp.

Conner is the son of Eric Conner of Red Level.

Colby Adams and the 16-and-under travel softball team, Alabama Fury, have been a bit busy this summer. Adams, a rising... read more