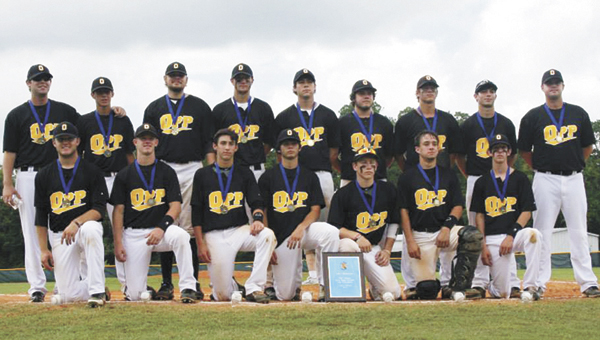 Scoring four runs and displaying a solid defensive effort late when it mattered.

That’s what it took for Opp’s Dixie Majors baseball team to beat Auburn 4-2 on Sunday in Selma to claim its second straight state championship.

Opp went ahead 2-0 early in the game, but Auburn cut it to 2-1 shortly afterward.

In the top of the seventh, Opp would score two runs on a double to make it 4-1. During the bottom half of the seventh, Auburn scored its second run with no outs. Opp then recorded the next three outs while allowing no runs to eventually win the state title.

“This year was so different because we just didn’t score a lo of runs,” Spann said. “We scored just enough to win. Our pitching and defense were the main difference.

“Offensively, we didn’t blow anybody out,” he said. “We did enough to win and held on.”

Spann said it felt pretty good to get his second straight state championship.

With the state title win, Opp advances to play in the 2013 Dixie Majors World Series in North Charleston, S.C., from July 27-31. Opp leaves for the tournament on Thursday and is currently raising moneys to cover the cost of the trip.

Opp, who will be representing Alabama at the tournament, faces Texas at 9 a.m. on Saturday at Charleston Southern University, one of the two fields being used for the Series. Tournament format is double elimination, and the championship is slated for 5 p.m. on July 31.

Spann said the teams at the World Series are going to be pretty good.

“For the most part, every team you play in the World Series is top notch,” he said. “You’ve got to have your best stuff that day to be competitive. I hope we have a good showing.”

Opp played in the World Series last year and won one game.

Spann said he hopes the team can build upon what they accomplished last year.

“I’d like to win two to keep getting better every year we go,” he said.

At the World Series, the Opp team will be facing teams comprised of mainly junior college and four-year college players.

The local team is mostly made up of high school players with a few junior college athletes, Spann said.

“We got about three that are going to be sophomores in college next year,” he said. “All three of those — one is already at Enterprise (State Community College). The other two are going to go there. We have three guys who just graduated (from high school) who are going to go play at different schools around here.

“The rest are going into their senior year in high school,” he said.

There are 14 players on the team. Seventy-five to 80 percent on them are from Opp. Two players are from Kinston; and one each come from Straughn, Brantley and Dothan.

All the credit goes to the players at what they’ve accomplished, Spann said.

“I’m really proud of the way they competed in the state tournament, and look forward to seeing how we do at the World Series,” he said.

Rodeo rolls on in Wyoming as last day starts

Jordan Whitman and Caleb Varner are at No. 24 in the team roping category of the 2013 National High School... read more