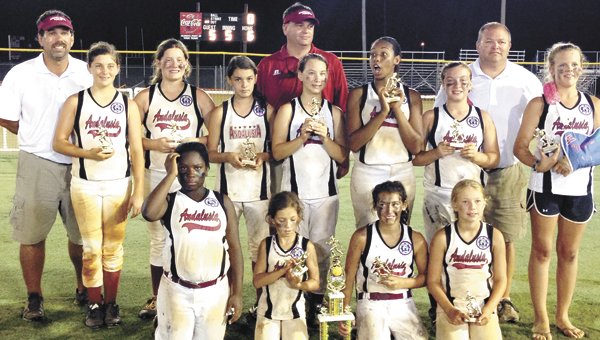 All of those morning, early-afternoon and night practices paid off for the Andalusia 12-and-under girls softball team Saturday night as the Lady Bulldogs beat Piedmont 6-5 to claim the 2013 12U ARPA Fast-Pitch State Championship in Gadsden.

Because the tournament was in a double elimination format, Piedmont had to beat the Lady Bulldogs twice to win the big trophy.

Piedmont won the first game 8-1 after scoring four runs each in the third and fourth innings. Andalusia only had two hits in the loss.

However, Andalusia bounced back and took advantage of some weary Piedmont girls in the winner-take-all second game.

The Lady Bulldogs came out and played a lot of small ball while scoring three runs each in the first and third innings of the 6-5 victory.

“We bunted around and created havoc on the bases,” Andalusia coach Anthony Mikel said. “Our pitcher, Sydney Ray, she pitched a great game.”

Additionally, the Lady Bulldogs put up a great defensive effort behind Ray during the win, Mikel said.

“We had one error the last game, which was a throwing error,” he said. “That turned a single into a double.

“We played well. The girls had a lot of key bunting in that game,” he said. “A lot of the girls stole bases. They just ran the bases real well. I’m really impressed with these girls and how much they’ve grown since we started.”

“We really didn’t have any errors the whole time,” he said. “We played solid defense the whole tournament.”

The Lady Bulldogs had to battle in some close games to get to the championship round Friday night and Saturday.

Andalusia defeated Hamilton 6-5 after coming from behind on a 3-0 deficit Friday night; and beat Piedmont 4-3 and Talladega 3-2 in winner’s bracket play.

Mikel said the competition at the tournament yielded some close games.

“We didn’t have any blow outs,” he said. “We were just a solid, play-making team. We don’t score a ton of runs. We played good defense have good pitching and fielding and do what we got to do to win.”

Mikel thanked the City of Andalusia, especially Alan Bracewell and Caitlin Shipman, for all of their help with the team.

Additionally, while she may have been hampered by an injury, Andalusia pitcher Tessa Walker sure helped the team out a lot, the coach said.

“Tessa was a huge part of the team at the state tournament,” Mikel said.