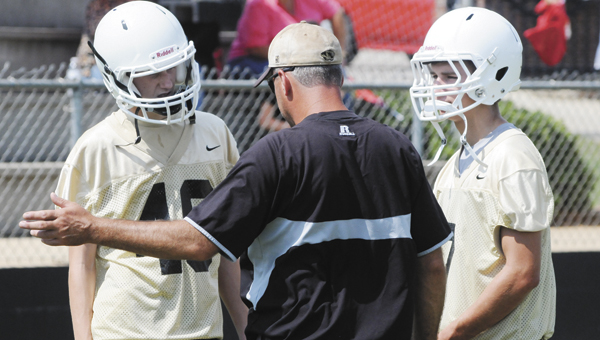 Straughn defensive coordinator John Fussell talks with a couple of his players during last year’s 7-on-7 tournament. | File photo

Those who are looking for an early taste of football need to get on over to Straughn on Thursday for its sixth annual 7-on-7 football tournament.

With the amount of rain we’ve gotten recently, SHS head football coach Trent Taylor quipped that the players are “either going to do a 7-on-7 or work on our swimming.”

“I don’t know which,” Taylor said.

The tournament will consist of nine teams. There will be two teams each from SHS and Andalusia. Other teams playing are Kinston, McKenzie, Brantley, Samson and Excel.

Starting at 3 p.m., the tournament will have three pools with three teams in each. Each team will have the opportunity to play a couple pool play games to gain top seeds.

After pool play ends, the tournament will transition to a single elimination bracket format.

“Everybody will get to play three games,” Taylor said. “Depending on what you do from there, you could get to play more than that.”

Teams also get to work on their 2-minute offenses and defense, Taylor said.

“For the majority of the teams that are coming, not many of them are spread teams,” he said. “It’s not something that’s a major part of their offenses.”

The tournament can yield a “competitive” environment, Taylor said.

“It’s kind of a way to have a competition at the end of the summer,” he said.

Taylor invited all to the tournament, which is free to the public.

“Anybody who wants to come out, we have cold drinks in concession stand,” he said. “Hopefully, we’ll need (the cold drinks) and not a life raft.”

Another chance to play ball