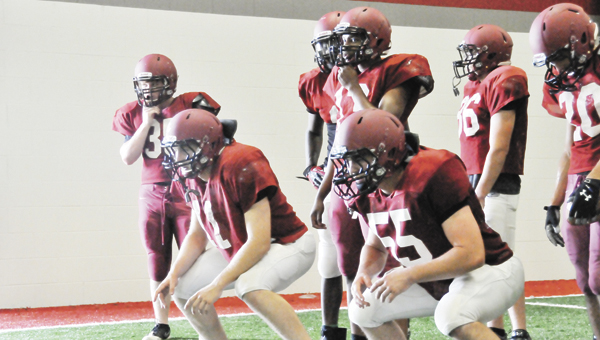 The Andalusia Bulldogs will be out of pocket for a few days starting on Sunday.

Andalusia’s football team will participate in its first ever team camp at Oakwood at Blue Lake Camp.

“Coach Bryant had a lot of success with this at Fort Payne,” Seymore said. “He’s the one who introduced this to us.”

Seymore said the most important facet about the camp is that it will help build team chemistry.

“It’s a way to try to get away from the normal routine,” he said. “We’re going to line up the field out there and we’ll do some of the normal stuff we do here on a daily basis.”

There are six scheduled practices for the camp. Each one of them focuses on either offense or defense. The Bulldogs will have two practices each day starting on Sunday.

In addition to practices, AHS has position meetings, a time for conditioning and a 7-on-7 scheduled for the three-day get-away.

Seymore said all cell phones and electronic devices will be taken up.

“We’re going to focus on the football team,” he said. “It’s all about team building, and trying to put the best product we can together for this fall.”

“There will be a lot of coaching and a lot of corrections,” he said. “I think it’s going to be good. They’re there with us for three days.”

Andalusia was originally supposed to play in Straughn’s 7-on-7 tournament today, but it was canceled because there weren’t enough officials available.

This added time gives coaches the opportunity to focus on the team camp and the voids that need filling on the team, Seymore said.

“We were very fortunate we got this worked out,” the coach said. “Blue Lake stepped up and made it possible for us to come down. We appreciate those people.

“It’s designed for us to get as many reps as possible when it comes to football,” he said.

Seymore said players will be split up with three guys to a room. Coaches make the room assignments.

“We put different people in different rooms for different reasons,” he said. “It’s all about us continuing that bonding process, and building the team up to where we feel like we can be competitive.”