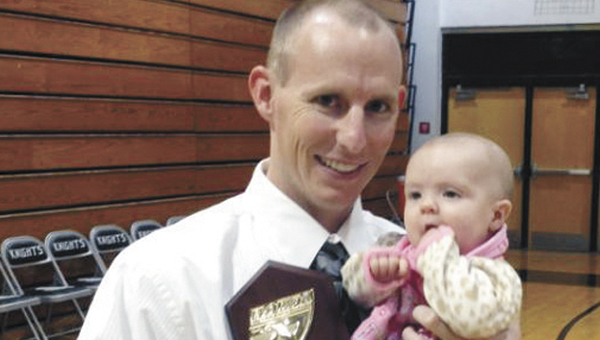 Troy Stewart couldn’t turn down an opportunity to work and move back closer to his family.

Stewart, a 2001 Pleasant Home graduate, is moving back to Covington County from Tampa, Fla., to coach the Florala Wildcats’ boys and girls basketball teams.

The Andalusia native was hired at a recent board meeting more than two weeks ago.

Stewart said he took the job because he knew the “tradition and background” FHS has in its basketball program.

“It’s a great opportunity for me to come back and be closer to my family, as well as my wife’s (Jenn) family,” Stewart said.

Stewart comes to FHS from T.R. Robinson High School, where he coached for one year.

In his only season at RHS, Stewart finished 15-7 and guided the Lady Knights to their first Class 5A district championship in 11 years. They went on to lose in overtime to Boca Ciega, Fla., in the regional quarterfinals earlier this year.

As a player at PHS, Stewart played on the varsity basketball team for three years. He was on former coach Anthony Clark’s 2001 state championship team for his senior season as a point guard.

After graduation, Stewart went to West Alabama and got a bachelor’s degree in physical education. He went on to start his coaching career at UMS-Wright in Mobile, where he stayed for two years and served in a number of coaching capacities.

Sometime later, Stewart decided to move to Cleveland, Ohio, to pursue his master’s degree in sports management. During his stint in Cleveland, the new FHS coach interned for the NBA’s Cavaliers. NBA superstar LeBron James left for Miami a year before Stewart’s internship started.

With the vast amount of playing and coaching experience under his belt, Stewart said he’s a fundamentals coach.

“I believe fundamentals build programs,” he said. “If you put all of them together, you can have a successful basketball team.”

Stewart said giving athletes and students the experience he had playing, as well as learning, is also a big reason why he’s a coach today.

“I’d like to instill in them and prepare them for their future and career goals,” he said.

Most of all, Stewart said he’s excited about coaching at FHS.

“I couldn’t pass up the opportunity to be able to work with (FHS principal Brent Zessin, a former coach) and help build the program and make it successful,” he said.

Stewart and wife, Jenn, have a 9-month-old daughter, Adalyne.

Additionally, he is the son of Larry and Betty Stewart of Andalusia.