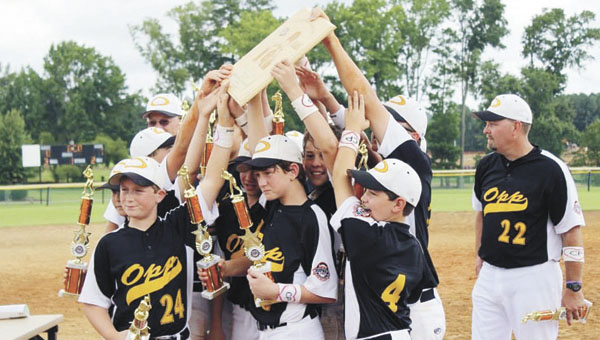 Opp faced its largest deficit as a 12-year-old All-Star baseball team to open up pool play on Thursday of the 2013 Cal Ripken Southeast Regional Tournament in Holly Springs, N.C.

However, the Bobcats settled down and started hitting the ball in the final two innings and defeated Startown, W.N.C., 14-5.

From there, Opp cruised through the rest of pool play and found itself in the regional tournament’s championship game against Gloucester, Va., on Sunday morning.

Opp’s Tylur Schively pitched a gem, allowing one hit and striking out 10 batters to help lead the Bobcats to a 7-0 victory and the regional tournament championship.

“It’s exciting for not only the City of Opp, but the county and state as well,” Ross said. “I think it’s something everybody in Opp can take part in and share.

“The facilities we play on back home and the state competition — none of that would be possible if we weren’t all competitive as we are,” he said.

After dispatching Startown in the first pool play game, Opp beat NE Augusta, Va., 6-3 after coming back from a 3-0 deficit.

Friday’s play was a cake walk for the Bobcats as they defeated Roanoke Valley, E.N.C. 13-6, and McKenzie, Tenn., 12-6 to end pool play undefeated going into bracket play.

Hagen Hodges threw five innings and Ethan Baker threw one inning in the win over McKenzie.

Ross said the boys never gave up when they were down during pool play action.

“They got a lot of fight about them,” he said. “They’ve worked hard. They’ve grown a lot over the last month or so, and have jelled together as a team. This is a good group of men. They’re easy to coach.”

On Saturday morning, the Bobcats had to play Key West, Fla., and defeated them 11-1 in a four-inning mercy rule win. Kody Richburg pitched in the win.

With the regional tournament win, the Bobcats were invited to play in the 2013 12U Babe Ruth Baseball World Series in Hammond, Ind., Aug. 9-16.

Ross said the plan is to play in the tournament, but a final decision hasn’t been made.

“We’re going to have a meeting (Monday night) and hash things out to make sure we’re all on the same page,” he said. “Especially with Babe Ruth assuming responsibility for travel with the teams.

“I feel like we’ll make the trip to Hammond and see how we fair,” he said.

The more than 100 miles swam this summer by the Andalusia Stingrays paid off in Cullman at the 2013 ARPA... read more