The third time was the charm for Rolly Weaver on Friday at the Georgia Cycling Gran Prix as he came out the top finisher of the Oxford Hills Road Race.

Weaver, who is the grandson of Roy and Sybil Weaver of Andalusia, participated in three of the gran prix’s six races. 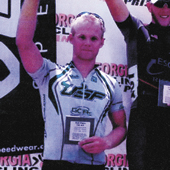 Rolly’s finishes got progressively better with each race from Wednesday to Friday. Rolly competed in the Cat 4-5 category. Each race had a different number of laps based on how long the course is.

In his first race Weaver, who competes for his college team at the University of South Florida in Tampa, Fla., finished in third place at 1 hour, 19 minutes, 4.961 seconds after riding 12 laps on the 2.5-mile Road Atlanta Course. In the second race, Weaver finished in second at 1:38:07.487 on the 3-mile Crossroads Baptist Course on Thursday.

After each race, Roy said he told Rolly that he needed to finish one notch better.

In the final race, Rolly faced his longest course yet at 10.47 miles per lap. The avid cycler capped his week by finishing with a time of 1:45:33.542, just 26 seconds better than the second-place finisher.

Rolly said it felt great to finish on top.

“It takes a lot of strategy,” he said. “Each race is a certain number of points. In between, you have the prix.

“In the latter races, I wasn’t racing for overall — I wanted to beat that,” he said. “In the second-to-last race, there were four crashes and six 90-degree turns,” he said. “It was really dangerous. If I would’ve crashed there, I would’ve lost my lead.”

In fact, Roy said Rolly was really racing to keep a good lead in the point totals.

Right now, Rolly is in the lead in the Cat 4-5 category with 119 points. He is 14 points ahead of Derek Tavasci.

Late Monday morning, Rolly was busy doing what he does just about every day — riding his bike long distance. He was in Orange Beach.

“It’s not uncommon for him to just ride the distance from (Andalusia) to Brewton,” the proud grandfather said.

The job isn’t through anytime soon for Rolly, who is now gearing up for the Florida State Criterium, which is the highlight race of the collegiate cycling season.

Rolly is the son of Linda Weaver of De Leon Springs, Fla.