She was living in Monroeville, awaiting the birth of her son. In other parts of the state and nation, violence surrounded the non-violent Civil Rights Movement. 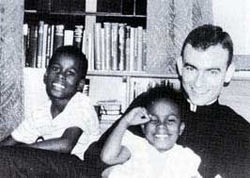 “Most of our information was coming out of Selma and Camden,” she recalled. “We didn’t have problems in Monroeville, but we had fears of unrest. We had seen things on the national stage and wondered, ‘Is it going to spill over?’

“Camden was only 40 miles away,” she said. “We were generally not seeing violence in small towns, but when it came so close, it was particularly terrifying.”

And then came August 20, 1965. That was the day a young Episcopal seminarian working for civil rights died when he stepped forward and took a bullet a white man intended for a black woman who wanted to buy a cold soft drink in a country store.

“We didn’t know anything was happening in Hayneville,” she said. “There were not news cameras there. The first we heard was on that night’s news, that two priests had been shot.”

The seminarian, Jonathon Myrick Daniels, was a native of New Hampshire and a student at the Episcopal Theological School in Cambridge, Mass., who had come south to participate in the Selma to Montgomery march. When he and a friend who traveled with him missed the bus home, they became convinced they should stay longer, and gained permission to remain in Selma, study on their own, and return at the end of the term for exams.

Daniels tutored children, helped poor locals apply for aid, and worked to register voters. He also worked to integrate the local Episcopal church. In August, he was among 29 protesters who picketed whites-only stores in Fort Deposit. All 29 were arrested and taken to jail in Hayneville. The juveniles were released, but the rest of the group was held for six days, each refusing bail unless all were released. It was on the day of their release – without transportation back to Ft. Deposit – that he walked with a white Catholic priest and two black females to the store.

A white man wielding a shotgun threatened the group. When he pointed it at one of the females, Daniels pushed her out of the way and stepped in front of her. He took the bullet and died instantly. The Catholic priest grabbed the other female and ran. He, too, was shot, and has lingering damage from the wound.

After that summer, Weber said, it was a long time before she thought much about Daniels again.

“It was significant, and always stayed with me because of the time and circumstances,” she said. “He was an Episcopal seminarian and I was Episcopalian.”

But she was involved in other things. Her family soon moved to Birmingham, schools were integrated, and her family was not much affected. The church struggled with tolerance, but managed to get through it, she said.

“I didn’t think a lot about Jonathan Myrick Daniels, just the times,” she said.

But in 2007, she moved to Montgomery started doing hospice social work.

“I had clients in the Hayneville area,” she said. “I would leave Montgomery, and go down Hwy. 80. It rekindled thoughts of what had happened in Hayneville.

In 1999, the Episcopal Church had added Daniels’ name to a list of modern-day martyrs. But being in Hayneville rekindled Weber’s interest, and she began to do research.

After reading Charles Eagles’ book about Daniels, “Outside Agitator,” she was convinced there was nothing more she could add to the story.

“But I thought, ‘What if you could dramatize it?’ ”

Weber is the author of “Truman Capote’s Southern Years: Stories from a Monroeville Cousin.” But a play was new ground. First, she read books on how to write a play. She researched her topic by meeting with Eagles, and visiting other people and places in Daniels’ story. Then, she actually wrote a play.

The script is in the hands of the Alabama Shakespeare Theater’s Southern Writers Project, the Cloverdale Players, and a drama group in Texas. Weber has high hopes that someone will produce it in 2015 to help commemorate the 50th anniversary of the Voting Rights Act.

Meanwhile, she has taken her work and put together a presentation which, she said, she can take “anywhere anybody wants it.” This Sunday, Aug. 4, the presentation will be given at St. Mary’s Episcopal Church, at 10:30 a.m.

You might have heard the adage about a woman scorned, but one local man knows it to be fact after... read more