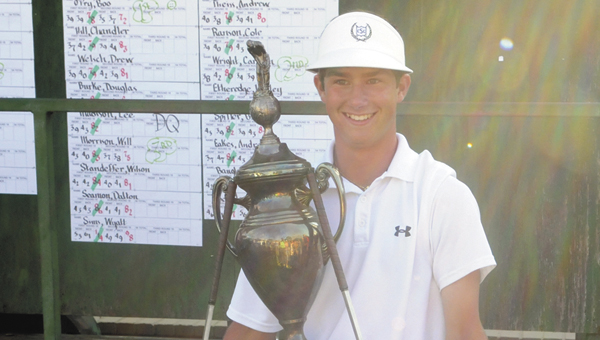 The rising junior finished at 4-over-par and along in ninth place for the championship. The winner, Connor Slane of Helena, finished at 14-under-par after shooting three rounds in the mid-to-upper 60s.

Rabren played his final round quickly, hitting the front nine in a little more than two hours to make the turn at 2-over-par. He made birdie on No. 3 and 4; bogeys on No. 1 and 5; and a double bogey on No. 8.

After making the turn, Rabren pared the first four holes on the back nine, bogeyed No. 14, and then pared the next three holes before bogeying the final hole to sign his scorecard at 76 in the 16-18 age division.

Rabren’s best round came on Wednesday, where he finished even for the tournament.

He shot a beautiful front nine, making two of his three birdies for the day.

Rabren’s only blemish came on No. 16, where he made bogey.

Rabren made two birdies on his front nine while making one birdie and a bogey to start the championship at 2-over-par.

The Straughn golf standout made par on 37 of the 54 holes; made six birdies; and had a great round on the Par 5s, finished at 4-under.