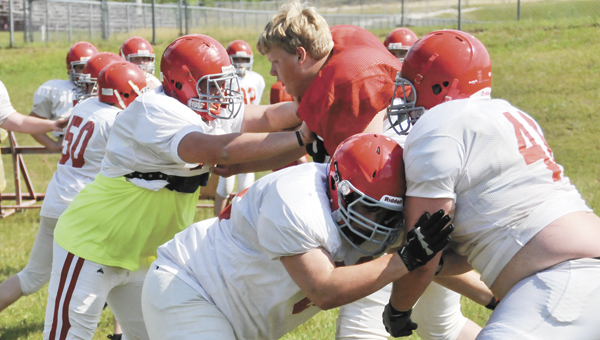 Pleasant Home linemen participate in spring drills earlier in May. The Eagles will partake in their second midnight practice, starting at 12 a.m. Monday. | File photo

Pleasant Home will take part in its midnight madness again this year as the Eagles kick off the start of fall practice at 12 a.m. on Monday.

Monday represents the start of fall football practice for all member schools of the Alabama High School Athletic Association.

The Eagles participated in a midnight practice last year, and head football coach Cody McCain said it was popular among the players.

“The kids really enjoyed it,” McCain said about last year’s venture. “It was something unique for them. We didn’t know if it was going to be a one-time thing.

“All during the spring, they kept asking about it,” he said.

The Eagles will gather at 8 tomorrow night and have a meal together. Afterward, players will record their height and weight, and have an equipment check.

Then, players will be split up into position meetings until the start of practice at 12 a.m. Monday.

“We’ll go for about two hours,” McCain said about the first practice. “We’ll let them shower and then get about a couple hours of sleep.”

PHS will then wake up bright and early at 7 a.m. for another practice.

McCain said the players will then have about a 36-hour break until the normal practice schedule resumes on Tuesday afternoon.

The coach also said the team won’t participate in any two-a-days.

“We’re only working with a roster between 35-40 kids,” McCain said. “We feel like we can get in a two-and-a-half-hour practice once a day.”

For the rest of the first week from Wednesday to Friday, the Eagles will practice in the morning.

“It gives us a better chance to avoid possible rain and thunderstorms in the afternoon,” McCain said.

In addition to Pleasant Home, Andalusia, Opp, Straughn, Red Level and Florala will start fall practice on Monday, but later in the day.

The Bulldogs will start at 3 p.m., and will have two-a-days on Tuesday and Thursday.

Florala and Opp will start their practice late in the afternoon at 4 and 5 p.m., respectively.