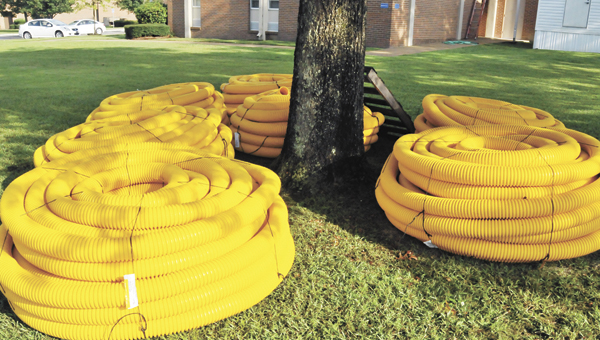 Pretty soon, LBWCC’s Crum Foshee Field will have the look of a world class baseball field as preparations continue for the 2013 16-18 Babe Ruth Baseball World Series later this month.

The World Series, which will be held Aug. 15-22, will bring 10 teams — who are regional winners — together from all over the country to play for the big title.

Players from every team but two will be arriving on Aug. 13, at either the Montgomery or Pensacola, Fla., airports. The other two teams will be here Aug. 14.

“We’ll pick them up and bring them to LBWCC,” Covington County Recreation Board Member Eddie Stacey said.

Stacey, who has been in charge of organizing the World Series here, said players will go through orientation at LBWCC, where they’ll meet their host families. Parents and coaches will stay in area hotels.

On Aug. 14, the World Series Banquet of Champions will be held at 6 p.m. in the Kiwanis Building.

As far as field modifications, there will be a new blue wind screen on the outfield fence, yellow fence protectors, new padding for the dugout rails and new base pads, Stacey said.

All of these additions to the field are being taken care of jointly by LBWCC and Babe Ruth, Stacey said.

Additionally, the hospitality office, the Babe Ruth office and the Covington Baptist Association’s laundry trailer have already been set up at the field.

Stacey said bleachers will be brought in from Opp and will go on the home and visitor side of the field.

Opening ceremonies will be held on the first day of pool play at 6 p.m., where each team will be recognized and will receive a plaque.

On Aug. 19, pool play will end for the tournament, and the top three seeds from each division advance to bracket play, which starts the next day, Aug. 20, at 4 p.m.

Covington County’s 16-18 Babe Ruth baseball team has been busy this summer getting ready for the big event, but with recent rains practices have been light, Stacey said.

Covington County played in a doubleheader against Brewton last night at Red Level. It will play another twin bill today against Pensacola, starting at 10:30 a.m. at RLS.

The team is playing at RLS, Stacey said, because they want to keep the field in good condition in the lead up to the World Series.