Bart Barnes is going to have to change his voicemail greeting sometime soon.

Barnes, who is the son of Doyle and Susan Barnes of Opp, was named the head women’s golf coach at Troy University by Trojans Athletic Director John Hartwell on Friday.

“I’m excited about this opportunity,” Barnes said. “I’m thankful that I get to work in the Troy athletics family here in the Troy community. I’d like to thank my friends and family for their continued support in this.” 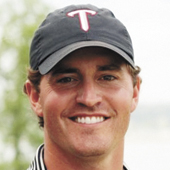 Since January 2010, Barnes has been serving as a part-time graduate assistant for the men’s an women’s teams at Troy.

In 2008, Barnes graduated from MTSU with a bachelor’s degree in business administration, and then went on to play professional golf on the National Golf Association Hooters Tour for one year.

Barnes said he got into coaching through a good friend, who was giving him lessons.

“He said if you can’t play (professionally), then you ought to look at coaching,” Barnes said.

From there, as they say, it’s history.

“The time I’ve spent here has been great,” Barnes said about working at Troy these past three-and-a-half-years. “I’ve had a lot of on-the-job-training, so to speak. The teams have had some success since I’ve been here. Both are improving in scoring as well as in the national rankings.

“The prospect to be able to devote more time to one team I think is going to be a welcome change for me,” he said. “I think it’s the right thing to do for our program. The men’s and women’s team will continue to improve.”

Hartwell said Barnes is the person for the job.

“This is an exciting time for the Troy golf program with the addition of Bart as the women’s head coach and with the state-of-the-art practice facility that is currently under construction,” Hartwell said in a press release. “Bart has done an outstanding job as an assistant coach under now men’s golf head coach Matt Terry, and I have no doubt that he will be a great leader for our women’s program.”

His grandparents, Don and Sally Stone, owned the original Hooks Barbecue in Opp. Once they sold the restaurant, it became a franchise, Barnes said.

Barnes went to the former South Highlands Elementary School before moving with his family to Elba, where his mother was a teacher.