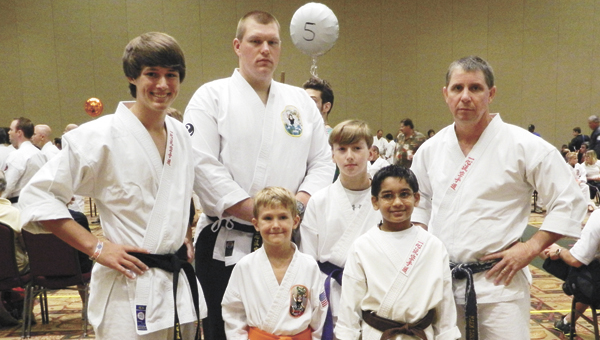 Taj Patel of Andalusia was selected as a finalist for two Isshinryu Hall of Fame awards at the 34th annual awards banquet and tournament July 26-27 at the Gatlinburg Convention Center in Gatlinburg, Tenn.

The IHOF banquet is held each year to recognized Isshinryu practitioners for their contribution to the art and for accomplishments in different areas of karate. Nominations are sent in worldwide for the awards. They are reviewed by the IHOF board and finalists are selected in each award category.

Patel was selected in the Young Male Karate-ka of the Year and Young Male Competitor of the year, but didn’t win the award. However, he was recognized at the banquet and received certificates commemorating his accomplishment. Additionally, he won first place at the tournament the next day.

Among Patel’s qualifications to be selected as a finalist included competing in tournaments in a six-state area, including Alabama, Mississippi, Louisiana, Florida, Georgia and Tennessee. Patel competed in 16 tournaments in the last year, placing in 40 divisions, including 20 first-place finishes.

Patel is the son of Neil and Binita Patel.

The IHOF also hosts the largest tournaments of its kind held worldwide, attracting top Isshinryu competitors from all over North America, and from as far away as Okinawa, where Isshinryu originated.

Six members of Andalusia Isshinryu Karate attended this year’s event and competed in the tournament.

Straughn has been ranked No. 5 in Class 3A by the Alabama Sports Writers Association in the preseason poll that... read more