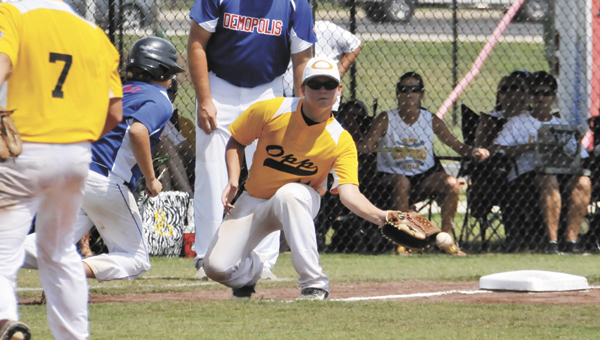 After a quick sack lunch, the Opp Bobcats were given a sheriff’s escort to the county line today. | File photo

Opp’s 12-year-old Cal Ripken baseball team will be experiencing a couple of firsts this week.

The Bobcats will be leaving today to get on an airplane, the first for many, and will eventually play in their first World Series as a team.

Starting on Friday, Opp will be competing against the best of the best in the United States at the 2013 Cal Ripken Major/60 World Series in Hammond, Ind., at the Hammond Optimist Sports Complex.

Opp coach Robbie Ross said the team’s approach is the same as it always has been.

Opp is riding a 13-0 record going into this week’s tournament.

The Bobcats’ 13th win came recently at the Southeast Regional in Holly Springs, N.C., where they beat Gloucester, Va., 7-0 for the title.

“This group of young men is really level headed,” Ross said about how they’ve accomplished a 13-game win streak. “They just play their game. They know how to play and work hard.”

Opp will start it’s pool play action on Friday at 2 p.m. against Kinsbridge, N.Y. The Bobcats will then have a good break before their next game on Sunday at 12:30 p.m. against East Boise, Idaho. On Monday at 8 p.m., Opp will play Hammond, and then will wrap up pool play on Tuesday against Grand Forks, N.D., at 8 p.m.

Single elimination bracket play starts on Wednesday, where the top three seeds from each division will play. Opp is in the National Division. The championship is slated for 6 p.m. on Fri., Aug. 16.

Opp enters this tournament representing the city with the smallest population.

When asked if other teams may be thinking the Bobcats are an easy target because of them being from a small town and the south, Ross said it’s probably true.

“That would easy to (think about),” the coach said. “That’s a mind set I can see them having, as well as them thinking they’re from the South.

“I think we have a good shot with our athleticism, depth in pitching and hitting,” he said. “If we can maintain those things, then we’ll be able to match up with anybody there. I think the only thing that can beat us is ourselves.”

While playing in the World Series will be exciting for these young Bobcats, just getting there will be fun for the players, Ross said.

“Eleven of the 12 haven’t ever flown before,” he said. “We’ll be flying into Chicago (Ill.), and then take a bus ride down to Hammond.”

Before Monday night’s game, Ross said the players will get a special tour of Wrigley Field, where the Chicago Cubs play.

Additionally, the support from the Opp community and surrounding towns has been tremendous, Ross said.

“The support that we’ve been shown, financially, through prayers, and people just reaching out to us wishing us luck and offering congratulations has been overwhelming,” he said. “It’s not just from Opp, but surrounding areas, like Straughn, Andalusia, Red Level and Elba — this entrire area.

“We’re thankful and the boys are thankful. They’re just doing what they love,” he said.