Past, future to connect at alumni game 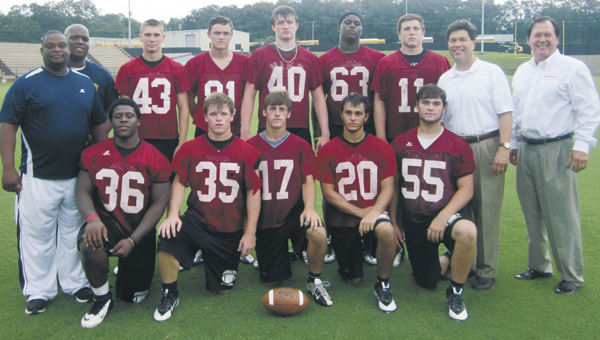 Andalusia alumni and current football players will square off in their annual meeting tonight at 6 at AHS Stadium. The first 15 former players who sign up will get a $10 gift certificate to Beef ‘O’ Brady’s. Sign ups will be held at 5 p.m. today in the AHS gymnasium. Additionally, participants will receive a free T-shirt. AHS former players shown are Jackie Woods, Jr., Larry Brown, John Jones and Tim Nall with the current roster of Bulldog seniors. | Courtesy photo

The connection between the tradition of the past and what lies ahead will be alive and well tonight at the annual Andalusia Alumni Football Game.

Circuit Judge “Lex” Short, who is an AHS alumnus and was the starting quarterback of the 1977 state championship team, said this game is a good opportunity for both current and former players to play together.

“What strikes me about Andalusia football and in a larger sense Andalusia, it has such a rich tradition of winning and supporting all of its programs,” Short said. “This game is just a way to keep that connection going between the tradition of the past and the tradition going forward.”

Players are still welcome to come and sign up. They need to come by the old gymnasium at 5 tonight to do so. The first 15 players to sign up will get a $10 gift certificate at Beef ‘O’ Brady’s. A T-shirt will be included for those who sign up to play in the game.

Kick off is at 6 p.m. at the Andalusia Municipal Stadium.

After a quick sack lunch, the Opp Bobcats were given a sheriff’s escort to the county line today. | File... read more