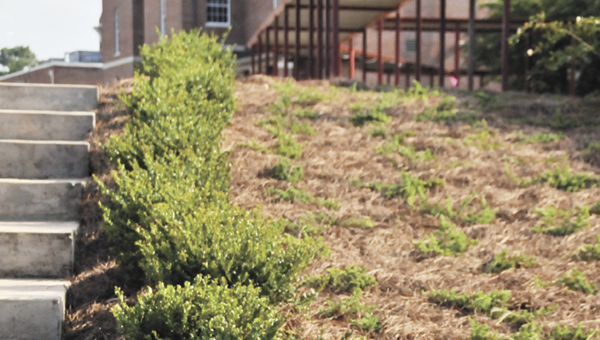 Workers added new landscaping at the entrance of the stadium. | Andrew Garner/Star-News

For more than a month, Andalusia High School Booster Club members, City of Andalusia workers, Bulldog football players and coaches have been busy getting the Andalusia Municipal Stadium looking good for the upcoming year.

“It was really a joint effort,” Raines said.

Raines said some of the tasks that were completed include painting the inside walls black, cleaning out the old locker room that’s right next to the scoreboard and putting in new landscaping at the stadium’s front entrance.

Raines said the old locker room, which used to house the junior varsity team, will now be in use again.

“We redid that and painted the inside and cleaned it up,” he said. “We made it to where they can use it at half time.”

Raines said the JV squad, middle school, youth league and varsity players will be able to use the room.

The stadium overall, Raines said, “should be a nice improvement.”

Additionally, the stadium’s seats were pressure-washed, the press box’s painting was completed from last year and the speakers were placed on the score board.

AHS head football coach Brian Seymore said the credit for the stadium’s uplift in looks goes to all of those who helped out.

“The booster club, the administration — a lot of people had a helping hand in this,” Seymore said. “We’re trying to get it ready for the weekend. It looks really nice. We definitely want to have a facility people can be proud of on Friday nights.”

Andalusia’s annual alumni football was canceled Thursday night because of rain. Due to the wet conditions of the field, Andalusia... read more