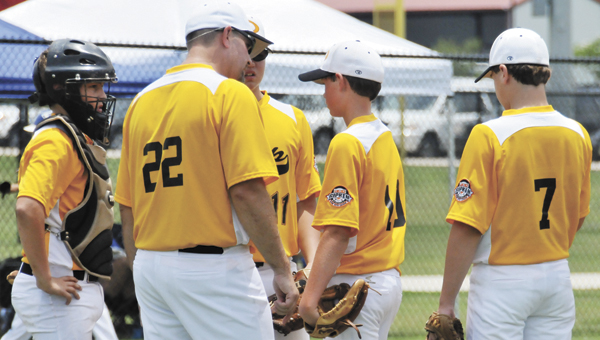 Opp coach Robbie Ross (22) talks to Tylur Schively (11) during an earlier game this season. The Bobcats fought hard in their 7-1 loss to Kingsbridge, N.Y. Friday at the 2013 Cal Ripken 12U Baseball World Series in Hammond, Ind. | File photo

Bobcats fall 7-1 to Kingsbridge, N.Y. Friday at 12U World Series

Opp took a hard 7-1 loss to Kingsbridge, N.Y. on Friday at the 2013 Cal Ripken 12U Baseball World Series in Hammond, Ind.

Kingsbridge, who was the Mid Atlantic Regional Champion, went ahead 2-0 early and held that lead until the top of the sixth, where it opened up with five runs to put the game away.

Bobcats coach Robbie Ross said the contest was the only time where his team trailed so late in the game.

“We had trailed before in games, but it was 2-0 going into the sixth inning,” Ross said. “That was the first time we had trailed that late in the game.

“I thought we didn’t play the sixth inning like we should have,” he said. “We gave in a little early, instead of playing a complete game.”

Don’t count the Bobcats out just yet. They have three more pool play games to go, and can still compete for a top seed coming out of the National Division.

Tylur Schively got the loss for Opp on the mound. After giving up one run each in the first and third innings, Schively put together a good fourth and fifth inning for the Bobcats.

“He threw well for us today,” Ross said about Schively. “There were some opportunities we had to make plays on defense that we didn’t make. They were what should’ve been routine plays for us. We didn’t move our feet to make plays on those.”

Opp scored its only run in the bottom of the sixth inning.

Kingsbridge scored one run each in the first and third innings to take a 2-0 lead to the top of the sixth.

Meet the Tigers to be held Tuesday night

Straughn will be holding its annual Meet the Tigers night Tuesday at Tigers Stadium. The event, which is put on by... read more