A basketball coach gives an autistic boy, “J-Mac,” a chance to play. Not only does the boy’s dreams come true, but he seems to work magic on the basketball court. 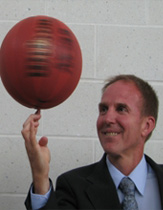 Now, that same coach is coming to Andalusia to help get all of the county’s teachers motivated for the new year, and to speak to parents and grandparents, too.

Coach Jim Johnson will be the keynote speaker when teachers in the Andalusia, Opp and Covington County school systems assemble in Andalusia Monday morning for their annual joint meeting.

And he’ll be the speaker this Monday, Aug. 12, in a 6 p.m. meeting at Andalusia City Hall when his target audience will be parents and grandparents of school-aged children. But anyone interested in children is invited to attend the free event.

Coach Johnson has been featured on Oprah, ESPN, and the Jim Rome Show. He was invited to meet with President George W. Bush and Secretary of State Hillary Clinton.

His message is “Dreams really do come true.”