Official: It’s the umpire’s call to stop a game for rain 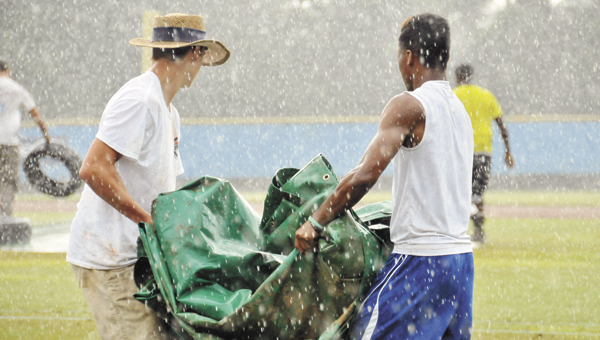 Field crew workers bring out a tarp to cover home plate at LBWCC during a rain delay at the Babe Ruth 13-to-15-year-old state tournament. | Andrew Garner/Star-News

There’s a four-letter word that’s the worst word in the English vocabulary for tournament directors — rain.

Bob Dickson, who is the 2013 16-18 Babe Ruth Baseball World Series Tournament Director for this week, said back in the day, you’d have to pay a dollar if “that word” was spoken.

Hopefully, many won’t have to pay much this week as the World Series kicks off on Thursday.

But, in case there is a rain delay, Dickson said it’s solely up to the umpires discretion when to stop the game.

“We make a decision, myself as the tournament director and someone from the local league — I believe it will be Manuel (Owens),” he said. “We’ll get together with the head umpire and see what our conditions are.”

No matter how long the delay is, Dickson said the games have to be fit in.

“We have to finish the series before Friday (Aug. 23) morning because we have all of the teams scheduled to go back that day,” he said. “It costs us a small fortune to redo the (plane) tickets.”

Dickson said they’ve event had to start games at 1 or 2 in the morning in previous tournaments.

This week, there will be six umpires officiating games at the World Series — three local officials and three from out of state.

The three umpires from out of state hail from California, Arkansas and Mississippi, respectively.

Dickson said the most important factor for these rain delays is to keep the players safe.

“The last thing we want to do is have someone injured because of the rain situation,” he said.

Opp and East Boise, Idaho, had one good inning each today at the 2013 12U Cal Ripken World Series in... read more