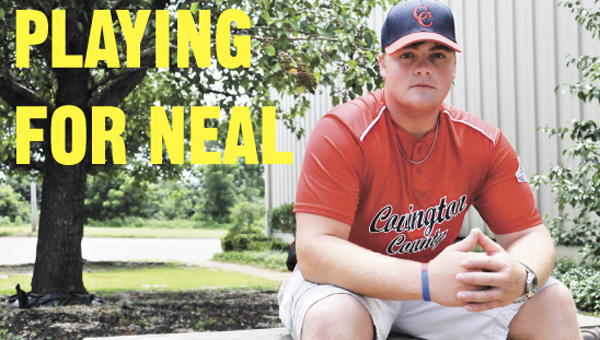 Cody Marler will be playing for good friend Levi Neal this week at the World Series. Neal did in a car wreck in 2011. | Andrew Garner/Star-News

Cody Marler has been thinking a lot about good friend Levi Neal lately.

In May 2011, Neal died in a car wreck that also claimed the life of another, according Star-News archives.

Ever since that fateful day, Marler has been playing for Neal, and he’ll be doing so this week at the 2013 16-18 Babe Ruth Baseball World Series.

“It’s pretty exciting,” Marler said about getting to play in the World Series. “(The team) didn’t think it was going to be here this quick.”

Around the time of Neal’s death, Marler said it was tough to cope with, so he went back to playing football and baseball — sports he loves.

“I started playing football that season, and then summer baseball (in 2012),” he said. “That summer, I even wore No. 18 on my jersey. Levi’s number.

“In any sport I’ve played, I’ve played for him,” he said. “Besides LBW baseball coming up, this (the World Series) is a big deal — it’s the last call for summer league. It’s a good way to finish it.”

In order to get ready for this week’s tournament, Marler said he and teammate Jordan Walker started practicing on their high school’s baseball field.

“We started looking forward to the World Series during high school baseball this past year,” Marler said. “Jordan and I, we sat out in the truck talking about it. We knew it was going to come.”

Marler said the pair took ground balls, had batting practice and did anything they could to get ready for the summer season and this week.

Marler and the 16 other players on the host team have been playing non stop for the past two months or so.

During last summer, Covington County went and played in a regional tournament. The local players were considered “under dogs.”

Marler said from that experience, they knew they can play with anybody, especially this week.

“We won a few games that week,” he said. “We’ve come together a lot recently. We got a lot adjustments to make. As far as playing as a team goes, once we get a full starting nine out there, we’ll give it a good fight.

“Who knows? You never know what could happen.”

Marler said he credits his parents for getting him to play the game he loves so much.

“If it wasn’t for them, I wouldn’t be playing today,” he said.

Marler is the son of Richard and Melissa Marler of Red Level; the grandson of George and Pat Ainsworth of Gantt, and Helen Whitman of Red Level.

Covington County’s first game will be tomorrow night at around 7 against Dexter, Mo.

Duo finds success out of pool

Aidan Vines (left) and Ava Bailey have competed at the state tournament level other than in swimming this summer. |... read more