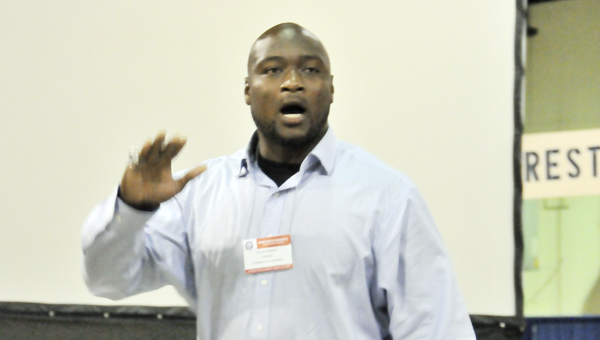 Former Auburn linebacker Eltoro Freeman had just one message for the baseball players Wednesday night at the 2013 16-18 World Series Banquet of Champions — ignore the distractions.

Freeman, who played on the Tigers’ 2010 BCS National Championship team, encouraged the players to look at themselves and realize what kind of influence they have on others.

“You are a very special group,” Freeman said from the floor of the Kiwanis Building. “God has blessed you to play on this stage.”

After his stint at Auburn, Freeman was drafted by the Baltimore Ravens. However, a knee injury later got him released from the team.

Freeman talked about how in his personal life, he began to focus on the distractions.

“I lost focus on my mission,” he said.

To get back on track, the former linebacker, who teaches and coaches now, said he started to believe in himself.

He reiterated his message back to the players who were present.

“Setting a positive example for our youth is important,” Freeman said. “Have fun and don’t forget you’re blessed.

“This is not just about you, it’s about your families and these kids,” he said. “Don’t let distractions keep you from your mission.”

The players’ mission this week will be to show all what they can do on the baseball field.

Cody Marler will be playing for good friend Levi Neal this week at the World Series. Neal did in a... read more