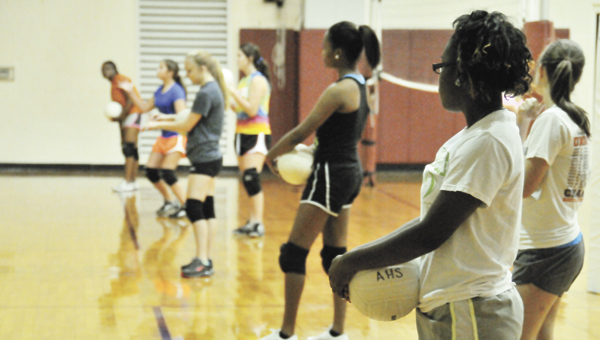 Andalusia’s volleyball squad sat down in a circle and set about making some goals Wednesday morning.

For the better part of 20 minutes, the varsity squad talked with its head coach, Angie Grimes, about setting goals on a daily and weekly basis.

Grimes said in each new season, you always want to have them.

“That’s what we were kind of talking about (Wednesday),” Grimes said. “We try to break goals down to daily and then weekly goals — talking to the girls about having purpose and really starting to have better technique.”

The Lady Bulldogs have been busy this summer, playing in several play dates, Grimes said.

“We’re just looking forward to the new season,” she said. “This is an enthusiastic group of young girls. I’ve already seen some vast improvements in transitioning issues we had from last year.”

And last year is just that, in the past, the coach said. AHS won only a handful of matches in 2012.

“I think with their hard work and dedication, we’ll be successful.”

AHS has two seniors — Christian Davis and Keanna Wright — and a lot of juniors, Grimes said.

Additionally, the Lady Bulldogs will court a slurry of upcoming freshmen this year, too.

The liberos will be junior Stephanie Watts, and Emily Dendy.

Andalusia will be playing in a three-team area this season with Monroe County and Hillcrest-Evergreen in Class 4A, Area 2. This is HHS’s first year to have a volleyball team.

The Lady Bulldogs will start their new season Thurs., Aug. 29, in Opp. The middle school squad will start first, followed by junior varsity and varsity.

Nico’s got the right mental approach

Nico Johnson’s message is clear: I have to earn my keep. The Kansas City Chiefs’ rookie and Andalusia said this... read more