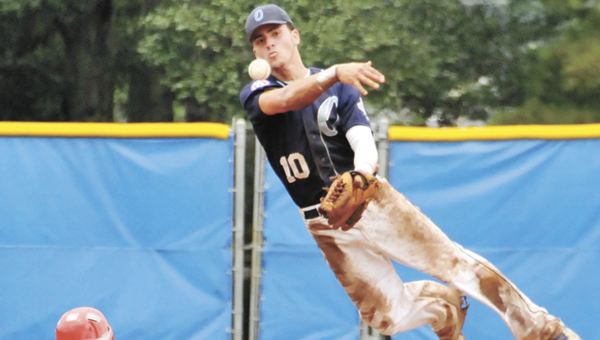 Onondaga, N.Y.’s No. 20 threw a complete-game shutout to help lead the Middle Atlantic team to a 5-0 victory over San Benito, Calif.

Ben Walsh only allowed four hits and struck out nine for the win.

Play of games was speedy throughout the morning, causing tournament officials to push games ahead of schedule in order to beat the weather.

The New Yorkers got off to a good start in the first inning, scoring a run to take a 1-0 lead.

With Onondaga’s pitcher on the mound, the Middle Atlantic team played solid defense behind him, easing any threats that may have come its way.

In the third inning, Onondaga scored three runs to take a 4-0 lead and full control of the game.

Onondaga tacked on its final run in the bottom of the sixth.

Columbia Basin scored three of its runs on errors during the early afternoon contest.

Washington took a 3-0 lead in the bottom of the third after Chandler Gribble’s RBI single.

Gribble’s team scored its first two runs on a throwing error from the pitcher to first base.

Finding themselves in a little trouble in the top of the fifth with bases loaded and one out, the Riverdogs of Columbia Basin managed to squeak out of the jam by retiring the next two batters.

Wisconsin cut the lead to two runs in the bottom of the sixth inning on a two-run double from Tyler Kryzanowski.