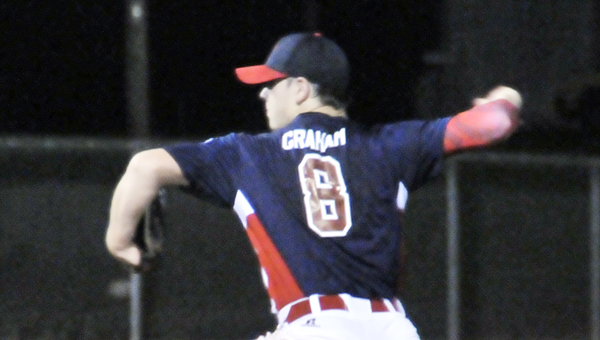 Covington County wasn’t about to let the weekend slip by without getting a win.

The host team beat the Mobile Bombers 3-2 Sunday night at the Hammett Holley Sports Complex in Red Level, ending a long afternoon and evening of baseball during pool pay of the 2013 Babe Ruth Baseball 16-18 World Series.

Kudos goes to the work crew who worked long hours to get the field in good shape for baseball.

Four games were played there on Sunday, which was the amount of games tournament officials wanted to be played.

Complete results from Sunday’s games are below.

Cody Marler hit a two-run single in the top of the sixth, and Ross Graham threw a complete game to help lead the host team to its first win of the World Series.

Marler and teammate Jordan Walker, know the field well as it was their home baseball field while at RLHS.

Both made great plays for the team — Marler with his big hit and then a last-out catch to end the game, and Walker with a sliding catch in left field to end the sixth inning.

Marler, who had three RBIs to lead CC, hit his first run in in the second on a sac fly that scored John Bess, who stole second and made it to third base on an error earlier in the inning.

In the fourth inning, Graham found himself in a bit of trouble when Mobile had bases loaded with no outs. County first got a force out at home, and then allowed a second run to score on a ground out to tie the game. The host team managed to get the final out with no more runs added.

Before Marler hit his two-run single in the sixth, Brandon Smith hit a bunt single to load the bases with no outs.

Bess and Walker both got fly outs later on, forcing Marler to come up with something at the plate, which he did.

Mobile’s Jason Williams hit an RBI double to cut the lead to 3-2 in the bottom of the sixth inning.

Chase Short, Smith and Walker had one hit each for CC.

Dexter’s Tyler Anderson stole home in the bottom of the sixth inning to help give his team the one-run edge and eventual win.

Anderson also came in for winning pitcher Doug Still to get the save with one out to go in the ball game.

Cord Sheehy went 2-for-3 with two singles to lead Dexter.

The contest was scoreless for the first two innings.

San Benito drew first blood in the top of the third on an RBI single from Yamasaki.

The team from California added to its lead in the fifth when Robert Soto scored on a squeeze play.

However, Dexter came back with bases loaded in the bottom of the fifth.

Tim Fox was hit by a pitch to score one run, and then Chase Young got a sac fly to tie the game at 2-2.

Mid County’s Michael Norris hit a walk-off single in the bottom of the ninth inning to lift the Texans over Columbia Basin.

Earlier in the ninth, Washington intentionally walked Mid County’s Kanton Richard to put two runners on with one out.

Columbia Basin drew first blood earlier in the game, but Mid County came back to tie it up in the bottom of the sixth when pinch hitter Jacob Garza reached on an error, which sent the tying run home, all with two outs.

Aaron Graham was on fire on the mound, striking out six and allowing two hits and one run in eight innings for the win.

Cameron Walker and Tyrel Panter had one hit each for Washington.

Alex Kaphengst hit two RBI doubles to help give Wisconsin a 2-0 lead by the fifth inning.

Fond Du Lac added to the lead later in the same inning, thanks to an RBI double from Jacob Schneider.

To end the fifth, Cape Cod’s center fielder made an incredible catch to give some life to the team from Massachusetts.

Kaphengst and Schneider went 2-for-3 each to lead Fond Du Lac.

Cape Cod’s Hunter Silva and Daniel DiMatteo had one hit each.

Today’s games at the 2013 Babe Ruth World Series were canceled because of the downpour of rain. | Andrew Garner/Star-News... read more