Fond Du Lac in the clutch 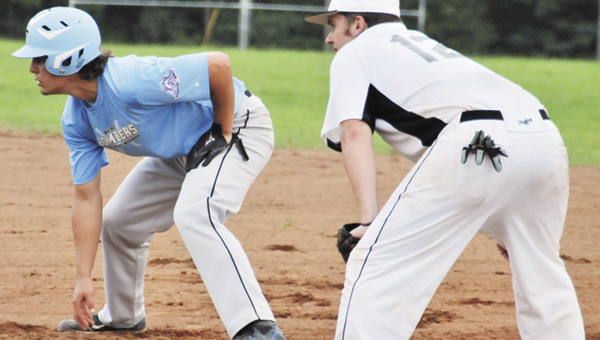 Fond Du Lac’s Alex Kaphengst hit a two-run double in the bottom of the sixth to help lead Wisconsin to a much-needed 7-6 victory over Mid County, Texas on Monday in pool play of the 2013 Babe Ruth Baseball 16-18 World Series.

With this win, Fond Du Lac finished 2-2 in pool play, securing a spot in bracket play, which starts today. Mid County beat Cape Cod, Mass. 1-0 earlier in the day to secure the No. 1 seed coming out of the National Division.

At Andalusia High School, where a couple of pool play games were fit in before rains in Andalusia flooded the baseball field, the Mobile Bombers got two wins in beating San Benito, Calif. 3-2 in a complete game, and Dexter, Mo. 3-2 in eight innings.

The last two games of pool pay at Red Level — Mobile Rawdogs vs. Cape Cod and Onondaga vs. Covington County — were not completed when The Star-News went to press Monday night.

Complete coverage of those games will be in Wednesday’s edition.

Kaphengst’s two-run double bounced off of the glove of Mid County’s left fielder to put the Blue Bombers ahead by a run going into the seventh inning.

Earlier in the sixth, Fond Du Lac’s Eric Feldner reached on an error to put two runners on with two outs before Kaphengst’s clutch hit.

Wisconsin scored four runs in the bottom of the second inning to take a 4-2 advantage.

Logan Wendt and Feldner had RBI singles, and Kaphengst added a two-run single in the second to surge the Blue Bombers ahead.

Texas didn’t let up when it added two runs in the third to tie the game at 4-all.

Mid County’s Kanton Richard made the game-tying score with two outs on the board.

Lightning then caused about a 20-minute delay in the game.

Fond Du Lac’s Jacob Schneider scored on a passed ball in the bottom of the third, and Mid County’s Tyler Lowery got an RBI walk to make it a back-and-forth scoring spree for just a minute.

In the next inning, Mid County took its second lead of the game on an RBI single from Michael Norris.

Wendt and Feldner went 2-for-4 each; Kaphengst went 1-for-4; and Tyler Kryanowski and Logan Merten went 1-for-3 each for Wisconsin.

Feldner allowed one hit in two innings to get the win on the mound.

Ryan Carline put together a two-hitter and had six strikeouts in Mid County’s 1-0 victory over Cape Cod on Monday at the Hammett Holley Sports Complex in Red Level.

With this win, the Texas team earned a No. 1 seed out of the National Division going into bracket play, which starts today at LBWCC’s Crum Foshee Field.

It was a back and forth contest between both clubs as each showed top-notch defenses on the field.

The score was 0-0 through the first three innings of play.

In the bottom of the fourth, Mid County scored its only run on a sac fly after there were two on base.

Richard got the sacrifice to put his team ahead 1-0.

MC got another chance to score some more runs in the fifth with bases loaded, Cape Cod had other plans, forcing the final out to be a pop up.

Sampere went 2-for-3 with an RBI to lead Mid County.

Cook and Silva had a hit each to lead Cape Cod.

Rob Pefreet and Jesse McCord went 2-for-3 each to lead the Rawdogs.

Corey Childress pitched an awesome game, only allowing four hits while striking out four in the complete game.

Mitch Darlington went 2-for-4 for Washington.

Onondaga’s JP Quinn went 3-for-3 with three RBIs to help lead Mew York to its essential three-run win over the Midwest Plains representative.

Dexter scored one run each in the third, fourth and sixth innings.

Josh Savacool and Chris Lenish went 1-for-3 each; and Avery Brooks went 1-for-2 to lead Onondaga.

Cory Poplanskat allowed one run on one hit in three innings to get the win on the mound.

Chase Young and Ryan Fortner went 2-for-4 each to lead Dexter.

On Sunday morning, Jordan Walker and Cody Marler received a piece of news that they couldn’t believe. They were going... read more