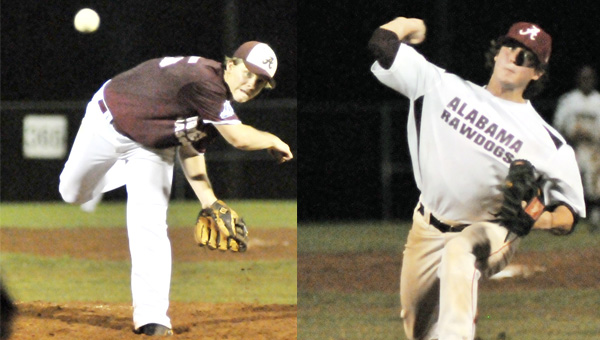 Garrett Waters had 10 strikeouts and allowed one run on one hit in 6.1 innings to help lift the Alabama Rawdogs to a 2-1 victory over Dexter, Mo. in the opener.

The Alabama Bombers defeated Fond Du Lac, Wisc., 7-1 behind the throwing arm of Peyton Jones, who struck out nine and allowed one run on five hits in a complete game.

With these wins, both Alabama teams advance to the World Series’ semifinal round.

All games will be played at the Hammett Holley Sports Complex in Red Level.

The Rawdogs put one run on board in the bottom of the first innning, and tacked on another in the fourth on a TJ Dixon RBI single.

To end the half inning in the fourth, the Rawdogs put up an impressive throw out from all the way out in right field.

The right fielder got his cut off man and then threw it home for the out at the plate.

Waters was throwing a no-hitter until the top of the seventh, where Brad Potts broke it up with a single to left.

Missouri got bases loaded with two outs in its final inning, but only got one run across the plate on an RBI walk.

Keegan Curtis came in in relief to get the save, striking the last batter out swinging.

Chase Young, Tyler Anderson and Cord Sheehy went 1-for-3 each for Dexter.

Curtis, Waters and Brian Lane went 1-for-3 each; and Dixon went 2-for-3 with the RBI to lead the Rawdogs.

Braxton Poole and Rudy Hernandex hit two-run singles to help lead the Alabama Bombers to a six-run victory over Wisconsin and their third straight win of the tournament.

Wisconsin scored its only run in the fifth when Logan Merten crossed on a sac fly.

The Alabama Bombers scored five runs in the bottom of the fifth, thanks to Hernandez’s hit and an infield error that Wisconsin coaches thought was an infield fly.

Umpires had to meet twice to discuss the play and whether the two runs scored on the error counted.

Those five runs in the fifth were all Jones needed to finish the rest of the game as he was in command of his pitches.

Chase Poole went 2-for-4 with two RBIs; Hernandez had two RBIs; and Jalo Taylor went 2-for-3 to lead Alabama.

Straughn will play Walter Wellborn Saturday night at 5 at the Cramton Bowl in Montgomery. | Andrew Garner/Star-News This isn’t... read more