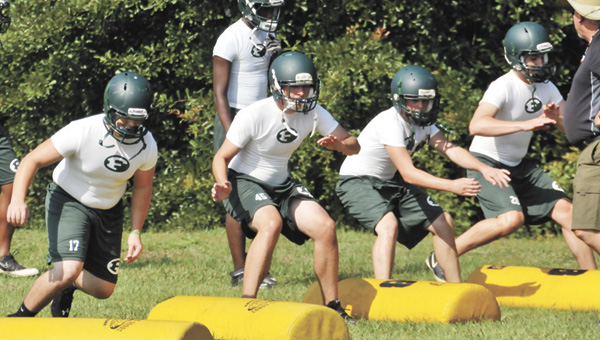 Florala’s Wildcats are going to use Thursday as a measuring stick for the upcoming season. | Andrew Garner/Star-News

Florala’s going to use its preseason game against Houston County as a big measuring stick for the regular season, Wildcats head coach Bubba Nall said.

“I think we’ve had a good fall practice,” Nall said. “The whole idea of this game is that it’s going to provide a measuring stick to see where our team is at.

“We’re excited about it,” he said.

Nall said upon talking with HCHS’s head coach, the Lions are a big and physical football team.

“I just hope our style of offense will give them fits,” the Florala coach said.

The game will start at 6 p.m. tomorrow.

There will be no kick offs with offensive drives starting on the 25-yard line.

On the offensive line, the Wildcats must get off the line well, he said.

The key for the defense is getting three-and-outs, Nall said.

“We haven’t done a good job scheming on what the other team is doing,” he said. “We hope our kids will pin their ears back and I’m excited to see what they’re going to do.”

Overall, the Wildcats football team is excited about the game tomorrow.

“Like everywhere in Alabama, they’re kind of tired of hitting on each other,” Nall said.

Nall said the stadium, which has gotten a big face lift this summer, looks great just in time for the game at Matthews Stadium in Florala.

“I just want to thank the community of Florala — the moms and dads,” he said. “They’ve done a heck-of-a job getting this stadium clean.

“I’m very grateful to what they’ve done,” he said. “This has given a new look and feel — a better pride for our program.”

Admission is $6 per person.

Covington County took Onondaga, N.Y.’s 2-0 lead in the bottom of the third inning and answered with a four-run inning,... read more