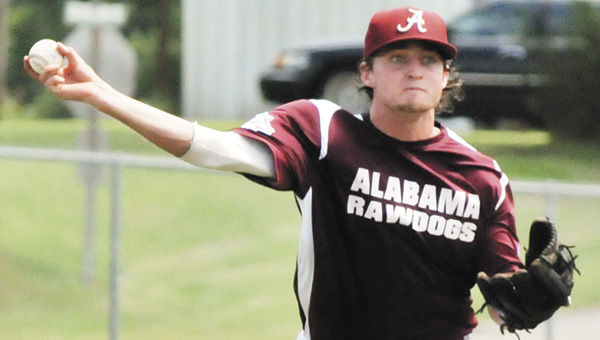 Alabama Rawdogs’ Troy Andrews throws to first base for an out during his team’s 5-3 victory over Onondaga, N.Y. at the 2013 Babe Ruth Baseball 16-18 World Series. | Andrew Garner/Star-News

The Alabama Rawdogs are playing to win.

Win they did Wednesday as they beat Onondaga, N.Y. 5-3 in the semifinals of the 2013 Babe Ruth Baseball 16-18 World Series at Red Level’s Hammett Holley Sports Complex.

Alabama’s state champions, who have won a World Series before, are aiming to do the same today as they face Mid County, Texas, in the championship at LBWCC’s Crum Foshee Field, weather permitting.

The Rawdogs took a healthy 5-0 lead by the top of the fourth inning to put New York all out of sorts.

What helped the Alabama team early on were timely hits. The Rawdogs tapered off a bit later in the game, allowing Onondaga to score three runs to cut their lead.

Rawdogs manager Tony Hendrix said the whole contest was a grind for the players.

“It was a tough game,” Hendrix said. “It was really a team effort. We’re fortunate to win.

“We left so many opportunities and allowed them to take advantage. That game was a lot closer than it should be.”

Hendrix went on to say that the Rawdogs left 13 guys on base during the game.

TJ Dixon’s sac fly in the top of the second that scored pitcher Jesse McCord started the scoring for the Rawdogs.

In the third inning, Keegan Curtis nailed his second double to help increase the lead to 2-0 for the good guys.

Dixon later then faked a steal for a squeeze-type play, forcing Onondaga pitcher Ben Walsh to come off the mound to contest the play.

That distraction allowed Curtis to score for a Rawdogs 3-0 advantage.

The scoring ended when Will Luft hit an RBI double to score Rob Petreet.

Alabama took its 5-0 lead on a sac fly by Brian Lane in the fourth.

Walsh then walked to load the bases with no outs.

Chris Schad then knocked an RBI single and Frank Vigliotti got a sac fly to help Onondaga cut the lead to 5-2.

Onondaga got its last run on an RBI double from Avery Brooks in the bottom of the fifth inning.

Cory Childress came in to relieve McCord in the fifth and took over, throwing three innings and striking out five.

Brooks went 2-for-4 to lead New York. JP Quinn, Schad and Wes Randall had one hit each.

This World Series tournament is a special one for Hendrix. One of his oldest sons, Brett, is helping him coach the Rawdogs, and his youngest, Gunner, is playing on the team.

“They’ve been following us around since they were little,” Hendrix said about his sons. “My oldest son won a World Series, and we’re trying to get my younger one one.”