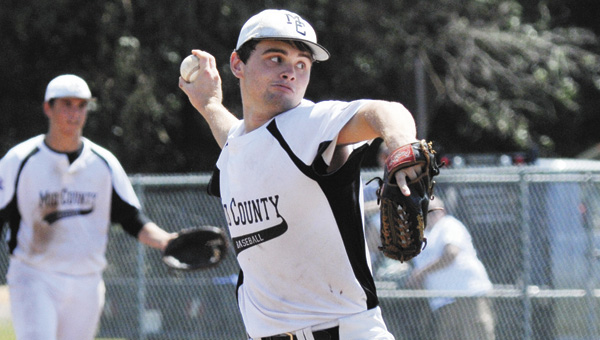 Mitchell Sanderson of Mid County, Texas, added to his stout pitching resume Wednesday by throwing a one-hitter to help lead his team to a 1-0 victory over the Alabama Bombers at Red Level’s Hammett Holley Sports Complex.

Sanderson pitched in his second outing of the 2013 Babe Ruth Baseball 16-18 World Series against a streaking Alabama team. He had seven strikeouts and a great defense behind him that also contributed to the win.

With the semifinals victory, Mid County advanced to play the Alabama Rawdogs in the World Series championship today at noon. Weather permitting, the championship is slated to be played at LBWCC’s Crum Foshee Field.

“He’s done that all year,” Collins said. “He had a perfect game and a no hitter in the state tournament. Then, he had two or three hitters at regionals.

“(Wednesday), he pitched the first game of the tournament here and won that game, 5-3,” he said.

Throughout the entire contest, Mid County dominated on the infield and outfield with Sanderson having a good handle of his command.

The Alabama Bombers put in JoJo Taylor at pitcher for the game and after a slow start, dialed in to put together a six-inning two-hitter. Taylor didn’t allow any earned runs and struck out two.

Mid County’s only run came in a two-play series during the bottom of the third inning.

Ryan Carline reached first base on a hit. Carline then ran on another hit to the shortstop, who then flicked the ball to second base.

Carline was ruled safe at second base as a result of the first play. Upon the safe call at second, the Bombers then threw the ball away at first base, where it landed in a dead ball area.

Based on Babe Ruth rules, since the ball landed in a dead ball area on the second play, the runner — Carline — is granted two bases.

Carline then took third base and trotted easily home for the score.

The Bombers had a great opportunity turned down in the top of the sixth when they had two runners on with one out.

However, Mid County’s defense stepped up again behind Sanderson to get the end of the half inning.

“We can throw it around a little bit and play defense,” Collins said. “We’ve got some good enough arms out there, too, that can make plays.”

Carline was one of two Texas players who hit off of Taylor.

Chase Pool went 1-for-3 to lead the Bombers.

What a great week of baseball

For the past week, I’ve had the pleasure of watching some great baseball. The 2013 Babe Ruth Baseball 16-18 World... read more