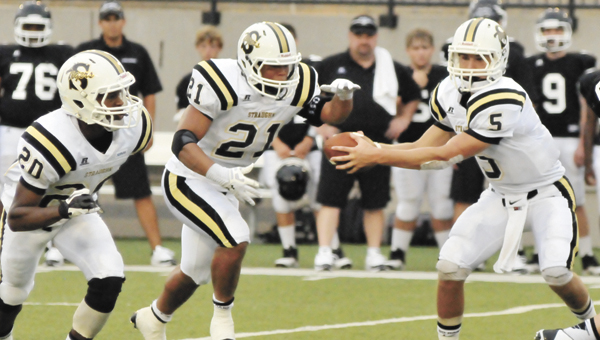 MONTGOMERY — By the time Straughn got on the bus Saturday night, the game result didn’t even matter anymore.

The Tigers defeated Walter Wellborn 35-26 to claim the 2013 Champions Challenge Championship at Cramton Bowl in Montgomery.

SHS head football coach Trent Taylor had some history against the Panthers already.

Taylor, while a blocking back at Andalusia High School, played on the 1977 Bulldogs state championship team that beat Walter Wellborn 7-0.

Taylor said the state championship win was similar to Saturday night’s game, but without the high-scoring.

“Neither one of us wanted to throw it,” the Tigers coach said.

Straughn put together a balanced offensive attack throughout the entire preseason contest.

SHS junior quarterback Rollin Kinsaul, who was christened the Tigers’ QB-1 two weeks ago, showed both a good passing an running attack.

The Panthers had some stellar athletes to speak for itself as well, namely running backs DJ Rhoden and Kevin Mixon, along with quarterback Landon Machristie, who helped put WWHS on board early.

Machristie found Mixon on a 77-yard pass in the first quarter with 5:50 to go to give his Panthers a 7-0 lead after Dakota Gravitt made the extra point.

On a 2nd-and-1 play during the Tigers’ second offensive possession, junior running back Daryl George scooted the ball in from three years out and then added the 2-point conversion for a 8-7 Straughn lead with 3:59 left in the first quarter.

George added his second touchdown of the night about eight minutes later on a 7-yard dash with 9:18 to go in the first half. With the extra point incomplete, SHS held a 14-7 lead.

That lead didn’t last long because Walter Wellborn’s Debron Taylor returned the kick off 86 yards for a TD to put the game at 14-14.

As the first two TDs for the Tigers were scored by rushes, their passing game would come into full fruition two offensive possessions later.

Like a pro-style look, Kinsaul found George in the back of the end zone for an 8-yard pass with 15 seconds left in the first half.

After regrouping at the break, the Panthers came out with a vengeance at the start of the third quarter.

Taylor said the defense didn’t expect WWHS to throw the ball so much. The Panthers had 106 passing yards in the first half, and totaled 161 for the game.

“You could probably tell by our adjustments that we didn’t expect (the pass),” Taylor said. “The young man did a good job out there.”

Walter Wellborn got some needed momentum on Straughn’s next offensive possession when George fumbled the ball for his first turnover of the game.

The Panthers had great field position at the Straughn 27, drove it 22 yards to the 5-yard line.

Straughn’s defense stepped up and clogged the middle to get a goal-line stand at the 6:01 mark of the third quarter.

“That was huge,” Taylor said about the defensive stop. “I think that was really, really big. They had the momentum after the fumble right there. To step up like we did right there, that was big.”

Straughn took advantage on its next offensive possession, driving the field 77 yards on 15 plays, where Kinsaul punched in from 1-yard with 11:30 to go in the contest. At that point, the Tigers went ahead 28-20.

SHS held the Panthers on defense, but a turnover by Lane Sirmon gave WWHS good field possession again on the 21 yard line.

The Tigers ate some clock on their next offensive possession, where Kinsaul scored his second rushing TD with 5:51 left.

Straughn didn’t quit as its defense stepped up to stop Walter Wellborn’s running attack on the Panthers’ last drive of the game.

“For our bunch to come up here and play in this atmosphere and win obviously, is huge for our kids,” Taylor said. “We did a lot of things wrong. There’s no doubt about it. They are things that we can fix.”

The Tigers will travel to face Andalusia next week in their annual rivalry game with the Bulldogs.

It’s Andalusia-Straughn week and locals are excited about the annual rivalry football game that also kicks off the 2013 regular... read more