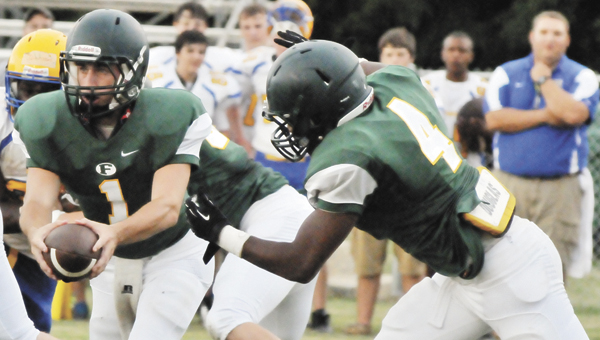 Friday night’s shaping up to be a good game for Florala as the Wildcats play host to Central Hayneville in their season opener at Mathews Stadium.

FHS fell 47-32 in its preseason jamboree game to Houston County. The Wildcats had five turnovers in the loss, which was something that was uncharacteristic of the team, head coach Bubba Nall said.

“I feel like if we take care of the ball and play good defense, then we’ll have the chance,” Nall said.

In order to improve on the turnover ratio, Nall said a lot of this week’s practice was spent working on running backs taking proper angles.

“If we improve in that area, the scoreboard might look a little bit different,” he said.

Central Hayneville, a Class 2A school, hasn’t won a football game in the last five seasons.

The last time CHHS won a game was in 2007, where it tallied a two-win season.

Nall said the Lions are known to be big, physical and fast.

Nall said the team is healthy and ready to open the season.

“We’re as healthy as we’re going to be going into the game,” he said. “There’s a lot of great enthusiasm in the community right now.

“Central Hayneville is coming down here expecting to win,” he said. “It aught to be a good game.”

Kick off in Florala is at 7 Friday night.

RLS to kick off against Choctaw County