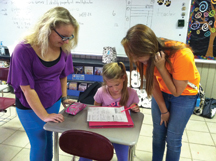 A three-year, $600,000 grant means that Straughn schools will soon be able to expand its after-school program.

County Schools Federal Programs Coordinator Donny Powell confirmed Thursday that Straughn Elementary and Straughn Middle schools combined forces and were awarded a 21st Century Learning Grant by the U.S. Department of Education in its most recent grant cycle. Funding is given on a three-year cycle, which means Straughn will receive $200,000 a year to operate the program.

“We couldn’t be more thrilled to have gotten the news,” said Principal Bette Ann Older.

Powell said the new grant will become effective in October.

“This program is used for helping students who may be struggling in class work to try to help students pull the grades up,” he said. “Another use is that parents use it for their after-school program when they work late, since staff is there until 5:30 p.m.”

Students are also exposed to several enrichment programs such as art, sports and music – and, a snack is provided.

The school also hosts a summer program, which is generally two weeks, under the program, Powell said.

With this award, there are four schools operating with a 21st Century Learning Grant, including Red Level Elementary, Fleeta Jr. High and W.S. Harlan Elementary School.

“All of those are in their third year, so they will have to write new grants if they want to continue those programs,” Powell said.

School is back in session, but families will get one last chance for an extended summer weekend thanks to the... read more