What it’s all about 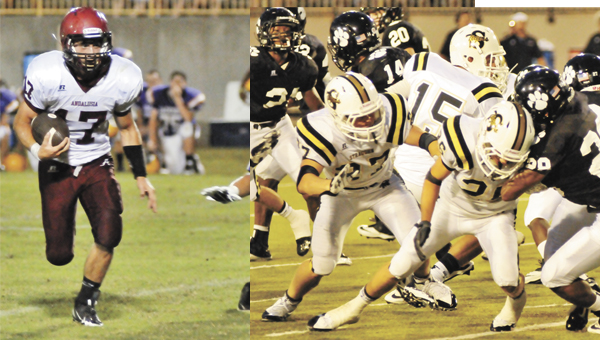 Andalusia and Straughn will square off in their annual rivalry football game tonight at Andalusia High School’s Municipal Stadium.

Both teams are coming off of all be-it, successful preseason jamboree games.

“Each year, there’s so much hype on the game,” Seymore said. “I think both sides are obviously fired up about the game. I think both communities are looking forward to it. It’s an annual rivalry and a lot of bragging rights that go along with it.”

For the past four seasons, Andalusia’s held the upper hand, winning four of the last five years.

Straughn head coach Trent Taylor said the game should be a lot of fun for both teams.

“It’s not where I’d pick to have a rivalry game,” Taylor said Tuesday. “Certainly we’ll tell our kids the same thing this week, that the outcome of this game doesn’t define us.”

It certainly didn’t define SHS last season after the Bulldogs outscored the Tigers 13-0 in the second half to win 16-14 in Straughn.

The Tigers went on to have a successful season, finishing in the Class 3A state semifinals.

Seymore, who went and watched the Tigers in Montgomery on Saturday, said his Bulldogs know what kind of team they’ll be facing tonight.

“They’ve got some play makers,” he said. “I don’t think it gets mentioned a whole lot, but I think it all starts up front with Straughn. They have a great offensive line.”

Taylor, who also was present in Jackson on Friday, said the Bulldogs — in his opinion — were the better team in the second half.

“What I do know is that Andalusia played extremely hard against a good football team,” Taylor said. “(This week) We talked more about not necessarily who our opponent was, but how hard our opponent plays.”

Andalusia’s Michael McCalman and Derrick Dorsey are the two main running threats for the Tigers. McCalman is a quarterback and Dorsey is a running back.

Defensively, Taylor said Montel Lee has made the transition from defensive end to linebacker well.

“The thing that was impressive is that he did a great job of playing the linebacker position, but also blitzed him a little bit,” he said. “They brought him from all over the place.”

Additionally, Lee will be accompanied by teammate Daniel Henderson, who Taylor said plays the position well at LB.

“It’s exciting to be able to do this,” Seymore said. “To me, we’ve got to kick it off and let these two teams square off. It’s a rivalry. It’s what it’s all about.”

Kick off tonight is at 7.