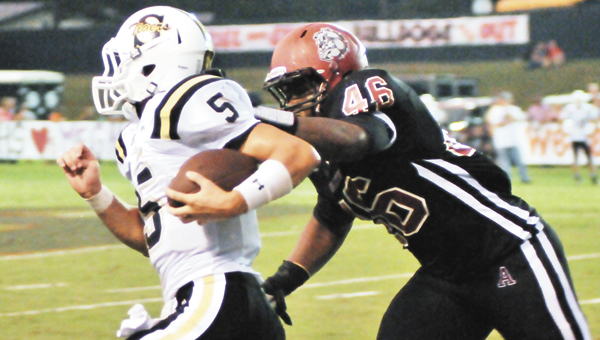 Andalusia’s Chase Helms made an interception with less than 10 seconds to help lead the Bulldogs to a 12-6 victory over rival Straughn on Friday night.

The senior’s interception that iced the game came at the perfect time for the Bulldogs.

Straughn drove the field from its own 15 all the way to Andalusia’s 20-yard line.

With 14.6 left in the game, the Tigers took a time out and AHS head football coach Brian Seymore urged Helms to play a little more aggressive on the ball.

Tigers quarterback Rollin Kinsaul rolled left and found Lane Sirmon near the goal line, but Helms was there already as he stepped in the way for the grab.

“It couldn’t have happened to a finer kid in Chase Helms,” Seymore said. “He was kind of playing timid as the drive went along. I told him to be aggressive, and break on the ball (during the timeout) — just things we work on every single day.

“I’m proud to see him get that pick to ice the game for us,” he said. “That’s what high shcool football is all about.”

For Helms, the play was the highlight of his high school career.

“I just had to push through it,” the senior said. “It’s an amazing feeling when you do something like that.”

With this win, Andalusia improves to 1-0 on the season and has won the last five straight meetings against SHS. The last time the Bulldogs lost to their rival was in 2008, during Seymore’s first year as head coach.

“Andalusia played a lot harder than we did,” Taylor said. “We didn’t have them where we needed them to be.”

Throughout the contest, both team’s defense rose to the occasion to label this game as a defensive show down.

“I’m extremely proud of the way our defense played all night long,” Taylor said. “We just couldn’t sustain anything offensively. We couldn’t stay on the field long enough offensively to give our defense a break.”

AHS running back Derrick Dorsey scored the Bulldogs’ first touchdown of the game in the second quarter on a 2-yard scamper with 4:49 on the clock. Daniel Henderson lined up for the extra point, but Brayden Burkhardt tried a fake pass to Jud Rogers, but it fell incomplete.

Forcing a three-and-out on Straughn’s next two offensive possessions, the Bulldogs led 6-0 at the break.

It wasn’t until five possessions and the fourth quarter later that AHS put another six points on the board.

For a minute there, it looked like Straughn was going to hold the Bulldogs as the Tigers made it a fourth and goal situation.

Andalusia’s Trevor Parker then punched the ball in from two yards and with an incomplete 2-point conversion, the Bulldogs led 12-0.

Two plays later, Straughn’s Daryl George showed why he can be so dangerous with plenty of grass in front of him.

George juked the Bulldogs twice and went 73 yards for a TD with 8:27 left to cut the game to a respectable six points.

AHS couldn’t get anything going offensive on its next drive, and Rogers punted it back to the Straughn 15, where the Tigers would start a remarkable drive that ended in an interception.

Kinsaul made passes to Keith Edgar, Justin McCormick and Austin Worley for double-digit gains, and with George’s 12-yard rush, the ball was on Andalusia’s 14.

The Bulldogs mounted up for one more defensive play, where Montel Lee sacked Kinsaul for a loss with 14.6 seconds left in the game.

“I can’t say enough about coach Taylor and his staff,” Seymore said. “Those kids play with tremendous heart. Rollin Kinsaul, no doubt he’s a winner. I was impressed. We’re really impressed with the way their guys played.

“It was two good football teams competing for four quarters,” he said. “We found a way to win the game.”

Taylor said the Tigers will get better.

“Everything we want to try to accomplish is still right there in front of us,” he said. “For whatever reason, they get up to play us. I guess that’s coaching. Our kids don’t seem to play with the same fire.”

What it’s all about