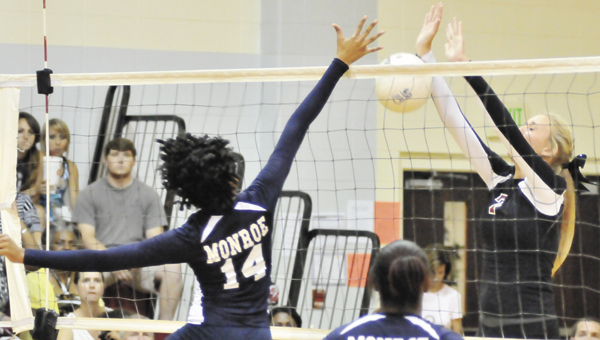 There are just some things that need to be fixed.

AHS head volleyball coach Angie Grimes didn’t have much to say after the girls’ match.

“We had too many serve-receive errors,” Grimes said. “We gave up too many points (Tuesday night). We can’t do that.”

With this loss, the Lady Bulldogs fall to 0-2 overall, and 0-1 in Class 4A, Area 2. Andalusia has a tough road contest tomorrow in Dothan as it plays Providence Christian.

“We’ve got some things we’re going to fix,” Grimes said.

In junior varsity action, it was a different story.

“They did a great job,” Grimes said about her JV team. “They did exactly what they were supposed to do.”

The varsity match got off to a great start, seeing the Lady Bulldogs take a 6-2 lead in the first set.

However, the Lady Tigers went on a tear as they went on a 6-0 run later to take a 16-9 lead, from which, AHS couldn’t recover.

Leading 23-16, MCHS served out for the first set, dropping serve only once.

In the second set, it was a little bit closer because both teams had good answers for each point.

Monroe County’s Keosha Booker slammed a big kill to give her team a 13-12 lead at the mid point of the second set.

Booker added another slam that gave the Lady Tigers a healthy 18-14 lead.

Andalusia’s bright spot came when it scored its 20th point.

Alexis Lawrence, who finished the match with three blocks and three aces, went up for a big block in the middle to make it 20-24.

Monroe County took a 8-4 lead in the third set and never looked back to outscore the Lady Bulldogs 17-9 to close out the set and match.