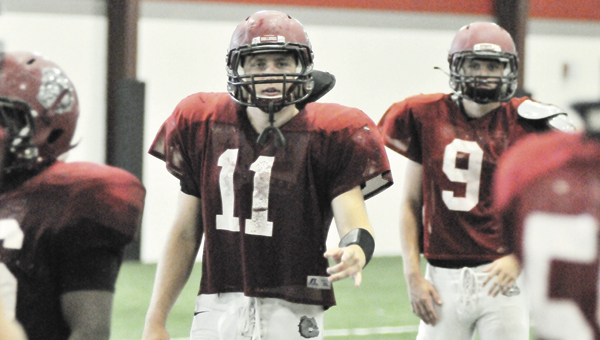 The Andalusia senior linebacker compiled eight tackles and earned a position grade of 79 in the Bulldogs’ 12-6 victory over rival Straughn last Friday night.

Henderson’s tackles and high grade on the gridiron earned him The Star-News’ Player of the Week honors.

Henderson, who took the role left by Ethan Jones, said his job is to make sure the defense is where it needs to be on the field.

“My job is to get everybody in the right spot before the play, and make sure that other guys are in the right spot to make tackles,” he said. “(AHS senior linebacker) Montel Lee had a great game for us last week. It’s a lot of fun to play linebacker beside him.”

Lee tallied 12 tackles for the Bulldogs in the win.

Henderson said his coaches preach doing the right thing all the time.

“Coach has always preached if you do the right thing, be in the right spot, then good things will happen,” the senior said. “I guess that’s just what I did last week. It was a good win for our team.”

Even though they trailed 12-0 in the contest, the Tigers never wavered on offense, especially the last 2:29 of the game.

SHS was on Andalusia’s 20 with 14.6 seconds and called a timeout to regroup.

At that exact timeout, Henderson said the whole defense knew it had to step up its game on this last play after an exhausting defensive series.

“Our entire defense was exhausted,” he said. “We had been fighting hard the whole game. We kind of knew — when they took a timeout at the end — we knew it was time to either put up or the game was going to be over.”

Luckily, Andalusia senior Chase Helms stepped right in front of Kinsaul’s pass for an interception to ice the game after taking it back some 40 yards.

While it was awesome to get a win against Straughn for his senior year, Henderson said he could’ve done better.

His grade of 79 wasn’t good to him, nor is it good for his defensive teammates.

“That’s not what we’re trying to accomplish,” Henderson said. “We want to score better around here. We pride our selves on our defense.

Attacking the ball quicker is an aspect of his game that needs improving, Henderson said.

“I did a pretty good job of tackling,” he said. “The quicker I get to the ball, the better.”

Andalusia travels for its first away game of the regular season on Friday as the Bulldogs face Monroe County for their first region game.

Henderson said MCHS’s offense is based around the quarterback.

“If we can control that aspect of the game, then we’ll be fine,” he said.

The son of Greg and Doty Henderson of Andalusia said he has a personal goal of winning a blue map this year.

“Anything less than that is going to be a disappointment in my eyes,” Henderson said.

Pleasant Home and Red Level are gearing up a physical contest as both start region play Friday night at Eagles... read more