SHS, Neal to square off 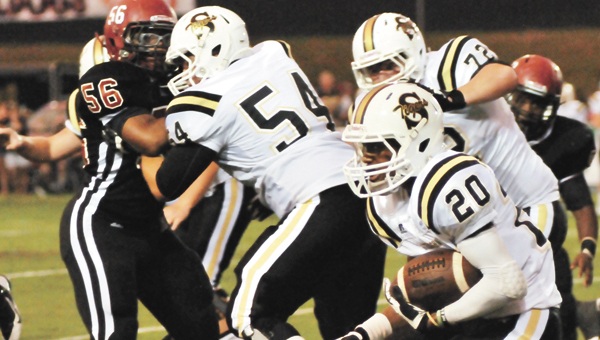 The ninth-ranked Tigers kick off their Class 3A, Region 1 play against the Eagles in East Brewton to end a three-game road skid, that included the preseason challenge in Montgomery. Last year, SHS beat WSN 36-30.

Taylor said WSN is based out of the “I” formation, which puts a running back directly behind the quarterback.

Additionally, the Eagles will line up in the Wildcat.

“It’s a power formation, where they’re two tight,” Taylor said. “They have three offensive linemen in the back field. It’s a direct snap, and they just run a lot of sweeps off tackle power, and what we call gut plays, where they go straight up the middle.”

Leading the charge for WSN in the back field is running back Quenton Samuel. Samuel’s a sophomore who also plays at defensive back on a good defense.

Taylor said defensively, the Eagles can run out of an even and odd front.

When asked what the main difference is between an event and odd front, Taylor said it’s the extra players on the field.

“Now and truly, you’re playing with five linebackers,” he said with an odd stack. “That gives you more speed on the field. Whereas, on an even front, it’s usually better suited for the pass because they can play two-high at safety. They may be doing a lot of that because they were playing spread teams (in week one and in their jamboree).”

Unlike WSN, Straughn is coming off of a 12-6 loss to Andalusia. The Eagles beat Holtville, 36-0.

Taylor said the team has had a good week of practice in the lead up to tomorrow night’s game.

“We went Monday morning and we got after it pretty good,” he said. “It was hot, so they had to battle several things there. I said it Friday night, I think our defense played outstanding. I’m not saying anything the kids don’t recognize. We’ve got to get more consistency on the offensive side of the ball.”

Kick off tomorrow night is at 7.

This week’s high school football action is shaping up to be one to remember, especially in Class 3A. Straughn and... read more